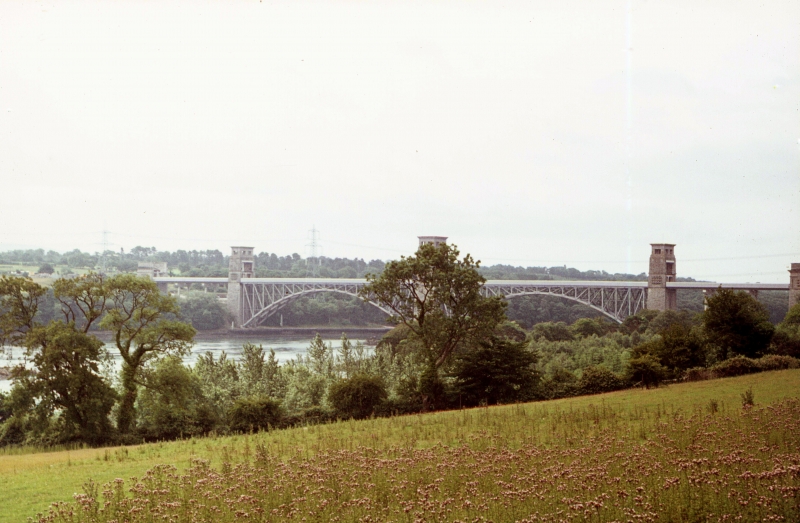 Originally built as a railway bridge for the Chester and Holyhead Railway, and designed by the renowned engineer-in-chief to the railway, Robert Stephenson, in association with Francis Thompson, the railway's architect, and Sir William Fairbairn as consultant engineer. The bridge made novel use of a continuous tubular construction of iron plates, forming twin tubes, set at the centre span 102ft ( 31m ) above the high water line, each pair spanning 140m (459ft 3in) between the intermediate water piers, the stonework built by Nowell Hemingway and Pearson, and the whole scheme cost £674,000. Each of the two pairs of tubes carrying the plateway, was 30ft high and 14ft 8in wide (9.1 x 4.45m), fixed at the centre with rolling expansion joints in the Anglesey and Caernarvon Towers. It was opened at a fine ceremony in 1850. The C & H Railway was amalgamated with the London and North Western Railway in 1858. After a serious fire on 23/5/1970, the bridge was extensively modified and strengthened to provide a road carriageway above and in addition to the rail track, designed by Husband & Co. for British Railways, using The Cleveland Bridge & Engineering Co. Ltd. as contractors.

The bridge piers are of rock-faced Anglesey limestone (Penmon Marble), set on a plinth, and Runcorn sandstone and brickwork. Each of the 2 central water piers is 221ft 3in (67.5m) high from foundation on the sea bedrock, and rise with battered sides to a corniced top raised on large corner blocks forming voids, originally designed to take suspension chains over rockers, on each face, all in an Egyptian Pylon style. The piers are voided, and stone lintels 20ft (6m)long span the rectangular holes for the twin tubes, with bold plat bands at the level of the top and bottom of the tubes. Each side face carries a symbolic engineering motif based on linked driving rods. The outer spans spring to similar abutment towers, flanked by sculptured lions on high plinths (q.v.). A huge figure of Britannia designed by Thompson for the centre pier was never executed. Inscribed on the approach face to the mainland water pier 'Erected Anno Domini MDCCCL Robert Stephenson Engineer'. The modified bridge, opened on 11/6/1980, consists of braced rivetted steel section arches with 'N'-truss spandrels spanning between the earlier piers, with the roadway carried on stanchions above the railway. The side spans are in reinforced concrete.

Included as one of the most audacious and exciting monuments of the great age of engineering where Britain was at the forefront of such innovatory developments. Included at Grade II, notwithstanding that the original design has been vitiated as a result of the fire.