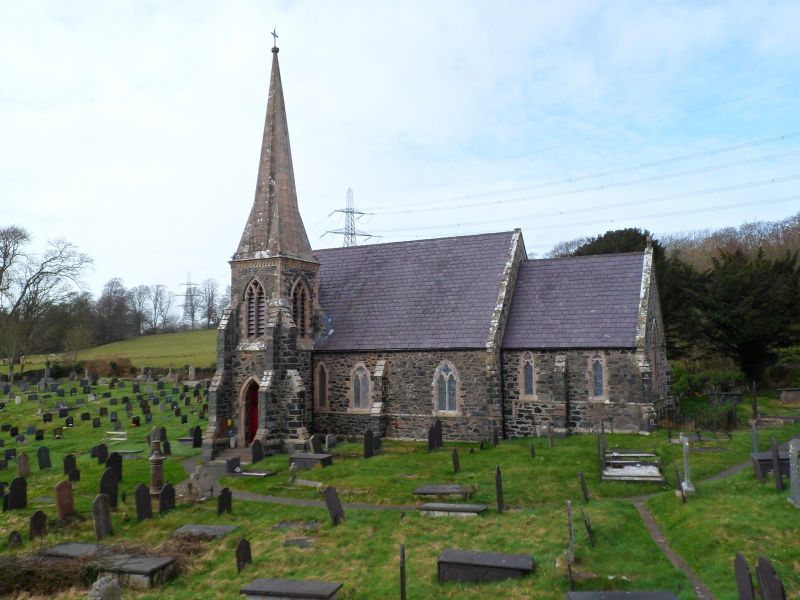 Location: In an isolated location SE of Llanfairpwll, below the railway and A4080(T) the church overlooks the Menai Strait and is c250m W of the entrance to the Britannia Bridge.

In the mid C19 many of the churches on the island were either rebuilt or extensively restored. The present church of St. Mary was built on the site of its predecessor and was completed in the late summer of 1853 at a cost of £950. It was consecrated by the Bishop of the Diocese on 14th September 1853. The N transept was added at a later date, probably 1885. The church appears to be in an isolated location but was originally built to serve the community which was centred around the area SE of Llanfairpwll.

Decorated style church built of random local stone rubble with sandstone dressings and a slate roof with stone copings and cross sockets. Nave with SW tower and spire; chancel to E end with N vestry. Nave is of 3 bays articulated by offset buttresses; 2-light geometrical tracery windows, W gable window with relieving arch of hammer-dressed stone and sandstone label with facial stops mirrored by E gable chancel window. Tower has offset angle buttresses and incorporates the entrance porch in lower stage, bell stage with lombard frieze above. Bell stage has vents, as for windows, on each face and broach spire has carved animals to each angle.

The internal door to the church is pointed and set into a camber-headed surround. Nave of 6 roof bays, the exposed collar beam trusses have braces carried down to walls posts and corbels. Corbel W of door is of an angel holding a shield, E an angel holding a parchment, other corbels with plain shield design on facing panels. Chancel is raised by 3 steps and has modern panelled wagon ceiling, painted with flowers. Sanctuary is raised by a further step and has a granite cusped panelled reredos across E wall.

Fittings: Font; hexagonal granite, supported on 4 pillars with cross carved within rectangle on facing panel, 1851. Pulpit; hexagonal granite, with cusped panelled design as for reredos. Pews; pine, installed in 1964, from a church in Machynlleth. Moulded sanctuary rail on brass plated stanchions, re-positioned in recent years. New organ by R E K Edwards of Liverpool, installed in 1979, pipework housed in a gallery in W end of the nave.

Monuments: Nave, N wall (a) grey marble tablet with pink columned surround bearing a wreath and cross with banner reading; TYDDLAN HYDANGAU, to the men of the parish who fell in the Great War 1914-1918, (b) white marble tablet with black surround by T Gaffin, Regent St. London, to T Schunk Esq of Carreg Bran d.1865. Chancel, S wall, pink granite tablet to the men of the parish who lost their lives in the 1939-1945 World War.

Miscellaneous: An oak litany desk, to Arfryn of this parish d.1943, gift of her brother E E Pritchard.

Listed as a good example of a small Gothic Revival Church, characterized by its use of clearly articulated architectural forms and a controlled, coherent vocabulary of detail.