The Bulkeley Hotel including screen wall to lefthand courtyard

A Grade I Listed Building in Beaumaris, Isle of Anglesey 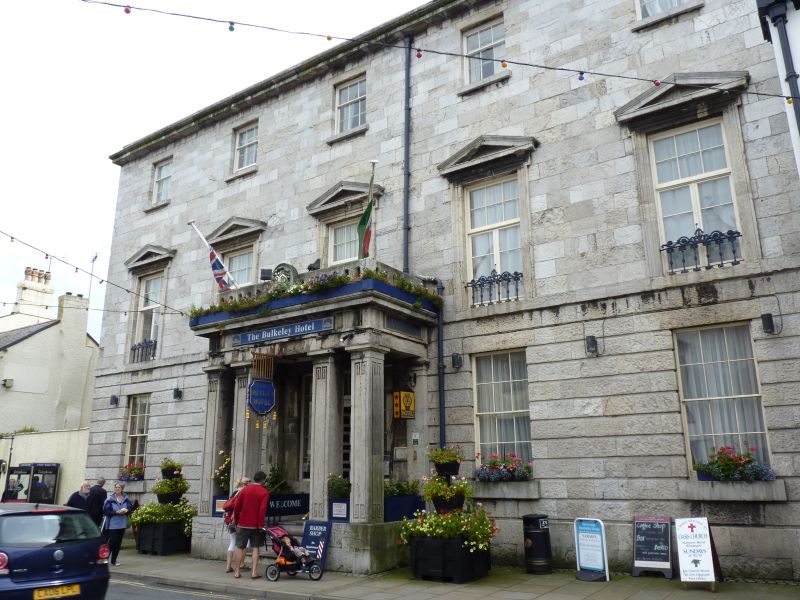 Location: Prominently sited with one front in the centre of Castle Street, and the opposite front forming one of the most conspicuous buildings facing The Green.

Begun in 1829, by Joseph Hansom and Edward Welch, architects of York, and one of their major commissions in Beaumaris that included Beaumaris Gaol and Victoria Terrace. It was said by Samuel Lewis that part of the medieval town wall on the sea front was taken down in 1831 to make way for the building and that stone was re-used in the building of the hotel. Alterations were undertaken c1899 by P. Shearson Gregory, architect of Bangor, whose work may have included the addition of a ballroom demolished in the 1930s when the additions to the hotel were redesigned. In the 1930s extensions were built by Colwyn Foulkes, architect of Colwyn Bay, and included the extant tea lounge and banqueting hall.

A neo-classical hotel of 3 storeys with attic and basement, of ashlar to the main elevations, slate roof behind coped gables and on a deeply moulded stone cornice, and ashlar stacks. The hotel comprises N and S ranges facing Castle Street and The Green respectively, and a central link to create a H-plan with courtyards. The main entrance is to Castle Street, which has an austere but distinguished 5-bay symmetrical front. The lower storey has channelled rustication over a plinth. Its entrance portico has paired square columns, with Soane-type incised key pattern, between central steps, an entablature with triglyphs and guttae over the columns, and a balcony with balustrade. In the centre of the balustrade is a coat of arms in an oval panel with scrolled sides. Double panelled doors have overlight of tall narrow panes, and flanking narrow windows with thin glazing bars. Inscribed over the door is 'The Bulkeley Arms'. The lower storey has 12-pane hornless sash windows. In the middle storey are architraves with pediments and sill band to windows incorporating 2-light casements below fixed small panes, and with neo-classical cast iron railings. The upper storey has shorter 9-pane sash windows with sills. The attic has 2-light roof dormers.

The S range has an equally distinguished symmetrical 5-bay ashlar front, with projecting canted central bay and tripartite lintels. The central entrance has an added veranda with a wave pattern to the fascia and simple iron posts. The revolving door was inserted in the 1930s, to the L of which is a margin-glazed 12-pane window, and in the R facet margin-lit small-pane French doors. In the outer bays the lower storey has 15-pane margin-lit sash windows. In the middle storey are 12-pane and in the upper storey shorter 9-pane sash windows. On the L side is a projecting pebble-dashed 3-storey 3-bay extension of equal height to the main range, with a hipped roof on projecting eaves. In the lower storey is a narrower bow-ended projection housing the banqueting hall, with balcony above, which has channelled rustication in pebble dash and render, French doors to the R and large windows. In the middle and upper storeys are 16-pane sash windows with shutters. On the R side is an gabled 3-storey 2-bay addition brought forward from the main elevation, and probably late C19 as it is shown in an inter-war photograph with the original ballroom on its R side. Its lower storey has 15-pane margin-lit sash windows. In the middle storey are 15-pane sashes with balconies and shutters and the upper storey shorter 9-pane sashes, also with shutters. A bullseye window is in the gable. Projecting further forward at the R end is a 1-bay flat-roofed projection, with shuttered windows similar to the extension to its L.

Side elevations are more utilitarian. In the L (W) end wall of the S range, facing Wall Street, the C20 addition is pebbled-dashed, has 3 sash windows of 5 lying panes in the lower storey, and 2 small-pane sash windows to the middle and upper storey. Further L and entered from Wall Street, the rear of the N and S ranges and the central link form a courtyard with walls of scribed roughcast painted cream, or pebble-dash, mainly with small-pane sash windows, with added escape stairs and doors, and entrance to a basement below the central link. The opposite courtyard on the E side has a flat-roof 1-storey projection, but otherwise has similar roughcast walls with sash windows.

The R gable end of the N range is roughcast above the Town Hall. The L gable end is pebble-dashed and has superimposed stair windows over a 1½-storey projection. Set back behind is an added 2-storey 2-window range set back from Castle Street behind a walled courtyard. It has pebble-dashed walls and slate roof, and 12-pane sash windows in the upper storey.

Entered from Castle Street the main imperial stair is to the R of the entrance hall. It has a wreathed hand rail with fluted newel, and cast iron balustrade with plant and anthemion motifs. It rises to a first-floor landing, which is crossed to the stair to the second floor. This is a curving cantilever stair with wreathed hand rail and plain balusters. On the second floor landing is a plainer attic stair. The C20 extension in the S range incorporates a simple open-well stair from first to second floor.

The S range has a corridor in the lower storey with plaster cornice enriched by egg-and-dart and billet friezes.

Listed grade I for its special architectural interest as a large and distinguished neo-classical hotel building with sensitive C20 additions, occupying an important position in both Castle Street and The Green, and for its contribution to the historical integrity of Castle Street and Beaumaris sea front.