Church of SS Mary and Nicholas

A Grade I Listed Building in Beaumaris, Isle of Anglesey 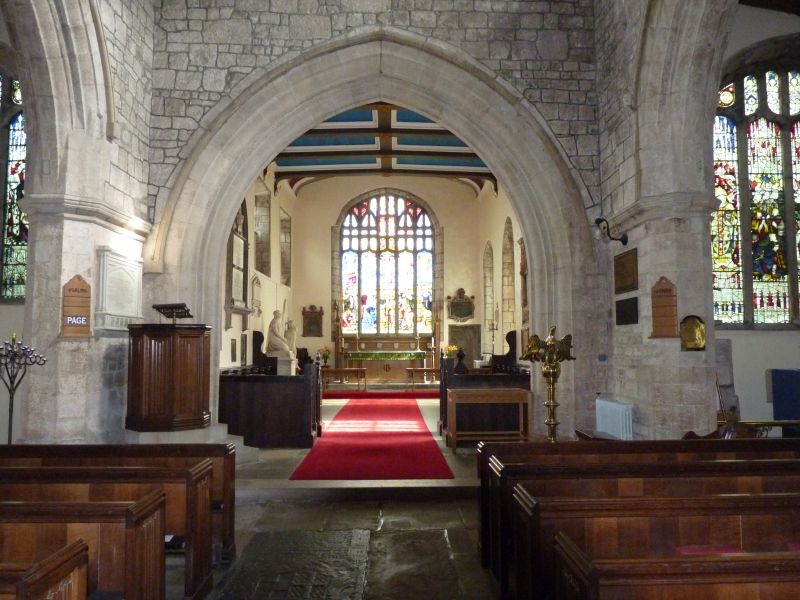 Location: In a large churchyard with Church Street to the E and Steeple Lane to the W.

Built c1330 to serve the borough of Beaumaris, founded in 1296. Alterations were made in the early C16, including the addition of an embattled parapet and insertion of Perpendicular windows externally, and a tie-beam roof internally. The N vestry was probably added in the C17 and the porch had been built by 1817. In 1825 the church was repaired by John Hall, architect of Bangor, who also rebuilt the upper stage of the tower. Restoration in 1902 was by G.F. Bodley, architect of London. This work included replacement of some windows and renewal of roofs. Internal furnishings are also mostly of this date, when C19 galleries were removed.

Decorated and Perpendicular style parish church comprising an aisled nave with S porch, lower chancel and W tower. Mainly of coursed stone with freestone dressings and battlements concealing the roofs, of flat pitch. The 2-storey porch, of which the added upper storey is of more random rubble, has a 2-centred arch with continuous chamfer and hood mould, and double boarded doors. Above is a 2-light window with wooden Y-tracery and diamond leaded glazing. In the W side wall is a blocked narrow Tudor-headed doorway. The buttresed S aisle has windows replaced in 1902. To the L of the porch is a window with 2-light Y-tracery in a C14 opening retaining hood mould and weathered head stops. To the R of the porch are two 2-light Decorated windows in earlier openings with weathered hood moulds and head stops. The nave has a clerestorey of 5 early C19 round windows with quatrefoils, and a single C16 3-light square-headed window. The E wall of the aisle has a larger 4-light 4-centred Perpendicular window. The 3-bay buttressed chancel has a diagonal SE buttress, and the battlements are enriched by tall crocketed pinnacles. It has 3-light Tudor-headed Perpendicular windows. The E window is 5-light Perpendicular, above the blocked segmental arch (or relieving arch) of a former crypt.

On the N side is a lean-to vestry occupying the 2 E bays of the chancel. It has a plain coped parapet and slate roof. It has a pointed E doorway, of which the hood mould partly missing, and double boarded doors. On the N side are 2 pointed windows with hood moulds and Gothic small-pane sashes with intersecting glazing bars. Above the vestry are 3-light square-headed windows with hood moulds and sunk spandrels, of the C16 or possibly C17. To the R of the vestry the chancel has a Perpendicular 3-light window similar to the S.

In the N aisle the wall has clearly been heightened, distinguishable by the change to larger stone blocks above window level. The wall has a central and angle buttresses. It has three 2-light Decorated windows with so-called "Kentish tracery" in C14 openings with hood moulds and head stops. A C14 pointed doorway R of centre has a continuous chamfer, and boarded door. The nave clerestorey has two C16 3-light windows. The aisle W window is 2-light Perpendicular and the S aisle has a modern 2-light square-headed W window.

The 3-stage tower has angle buttresses in the lower stage. The S side has a pointed doorway with hood mould, and a studded door. Above it is a cusped window. The W side has a loop below a cusped window. The N side is similar but has stair loops to the turret on the NE side. The middle stage, which is stepped in on the W side, has similar windows. On the E face is the line of an earlier, steeper, nave roof. The upper stage, rebuilt in 1825, has large 2-light Y-tracery belfry openings with louvres, and big clock faces at parapet level. The parapet has coped battlements and broad crocketed corner pinnacles.

The porch has a single cross beam on corbelled brackets. The C14 nave pointed S doorway has a continuous chamfer with hood mould and head stops, and recessed modern doors. Above the doorway is the line of an earlier porch roof.

The nave has 4-bay C14 arcades with octagonal piers, moulded capitals, and 2-centred arches with linked hood moulds, which have head stops on the S side only. The renewed cambered tie-beam roof does not follow the nave bay structure. It is 7 bays, with beams on corbelled brackets, bold painted bosses, some of which are original, and plastered panels with moulded ribs. There is no tower arch, but a pointed doorway and door with strap hinges. At the W end of the nave is an organ loft on panelled wooden posts, and with a panelled front enriched by open quatrefoils in roundels. The chancel arch is comparatively low, suggesting heightening of the nave in the late medieval period, comprising 2 orders of continuous roll moulding to a 2-centred arch with hood mould and plain stops (probably intended for carving but not carried out). Aisles have C19 trusses on corbelled brackets and boarded ceilings. In the N aisle is an ogee headed piscina, of which the former corbelled bowl has been broken off. In the S aisle the piscina also has a broken bowl, under an ogee head of which the crockets are partly missing.

Of furnishings, the outstanding feature are the choir stalls of c1500, probably brought here from Llanfaes Priory. The stall ends have Gothic panelling and poppy heads, and the fronts have blind Gothic panels. Seats have rounded backs and angels on the arm rests. There are 19 contemporary misericords, all with winged angels but with different heads to the supporters, and a 20th dated 1902 in similar style. The C19 octagonal font has slender clustered shafts forming the stem, and a bowl with deeply cut Gothic panels. Pews of 1902 have ends with linenfold panelling. The pulpit has similar detail. The S aisle chapel has a brass communion rail. The sanctuary has a communion rail post 1947, and diaper work to the floor. A mid C20 wood-panelled Gothic reredos has fluted shafts surmounted by angels in prayer.

There are a large number of memorials. The most significant are the medieval memorials in the porch and N aisle. The porch contains a stone coffin and lid with high-relief effigy of Joan (d 1237), wife of Llywelyn the Great and daughter of King John. It was originally at the nearby Franciscan Friary of Llanfaes, but after the Dissolution was put to mundane use until it was rescued and taken to Baron Hill in 1808, as recorded on 2 plaques, in English and Latin respectively, and finally to the church. In the N aisle is a late C15 alabaster chest tomb with full-length effigies, and the chest enriched with weepers (in the form of saints) under canopies alternating with blank shields, formerly painted. The figures are said to be William Bulkeley (d c1490) and his wide Elen Gruffydd of Penrhyn, or alternatively Rowland Bulkeley (d 1537) and his wife Alice.

In the chancel N wall is a Gothic stone tablet erected in 1809 commemorating David Hughes (d 1609), who established the town's first school in 1603 and under whose will almshouses were built in 1613 at Elusendai in Llanfaes parish. It has clustered shafts and pointed arch framing Welsh and English inscription panels surmounted by an urn. Beneath it is a brass plaque to Anne Owen (d 1694) with Coat of Arms, and to its R a small late medieval brass to Richard Bulkeley and his wife Elizabeth of c1530, in a shallow arched recess with sunk spandrels. Further R is a sarcophagus-type tablet to Capt Hugh Rowlands Williams (d 1795). A freestanding classical memorial to Charlotte Williams Bulkeley (d 1829) is by John Ternouth of London. A sculpture of a kneeling woman stands on a high base with English and Welsh inscriptions. Within the sanctuary is a high-relief memorial to Baron Bulkeley of Beaumaris (d 1822) by Richard Westmacott of London. It has a bust on a pedestal, and a mourning woman comforted by a hooded female figure bearing a cross.

In the E wall of the chancel is a memorial to Margaret Jones (d 1609) comprising a Latin inscription in an arched panel. The sides have motifs such as spade and scythe, and skull and cross bones, in relief. It is surmounted by a fluted entablature, achievement and orb finials. On the R side of the E wall is a memorial to Thomas Caesar (d 1632), comprising inscription panel, angels facing outwards to the sides, scrolled pediment with achievement and skulls R and L. Below it is a simple but large slab commemorating William Thwaytes (d 1563). In the chancel S wall is an oval inscription panel to Wynn Howard (d 1796). A marble Gothic wall tablet under a crocketed ogee arch is to Hugh Davis (d 1821) and niece (d 1869), and a marble inscription panel to Charles Yorke (d 1897) is signed (Yarwood?), the name partly worn away.

At the E end of the nave N wall, above the pulpit, is a Tudor-Gothic tablet to Rowland Williams (d 1836), by Robert Johnson of London. It has an arched panel flanked by clustered shafts, above a frieze of quatrefoils in lozenges. On the corresponding S side of the nave are brasses to William Turner (d 1904) and to the Rev Thomas Kyffin (d 1909) by Jones and Willis.

In the S aisle the N side of the chapel has a classical wall tablet to Margaret Hughes (d 1697). It has Ionic columns, apron with garland, entablature and achievement flanked by finials. On the corresponding S side is a monument to Owen Owen (d 1833) and family by Spence of Liverpool. Its panel is spanned by an arched wreath and has an apron with coat of arms.

Several windows have stained glass. The E window depicts the Crucifixion, post 1918 and possibly by J.C. Bewsey. In the chancel S wall the E end window has fragments of medieval glass, and the window adjacent to it shows the Coronation of the Virgin and Nativity, post 1918 and signed by J.C. Bewsey. The aisles have E windows by C.E. Kempe, depicting Nativity to the S and the Angel and the Shepherds to the N. In the S aisle windows are early C20 windows, of which the easternmost window depicts the presentation of Jesus at the Temple, and the westernmost window Moses and Noah, by C.E. Kempe. In the N aisle the early C20 easternmost window depicts the New Testament scenes 'suffer little children' and 'this is my beloved son', by Wailes and Strang of Newcastle-on-Tyne. The westernmost window, of similar date, depicts SS Peter and Paul, by Kempe & Tower.

Listed grade I as an outstanding and well-preserved medieval parish church.