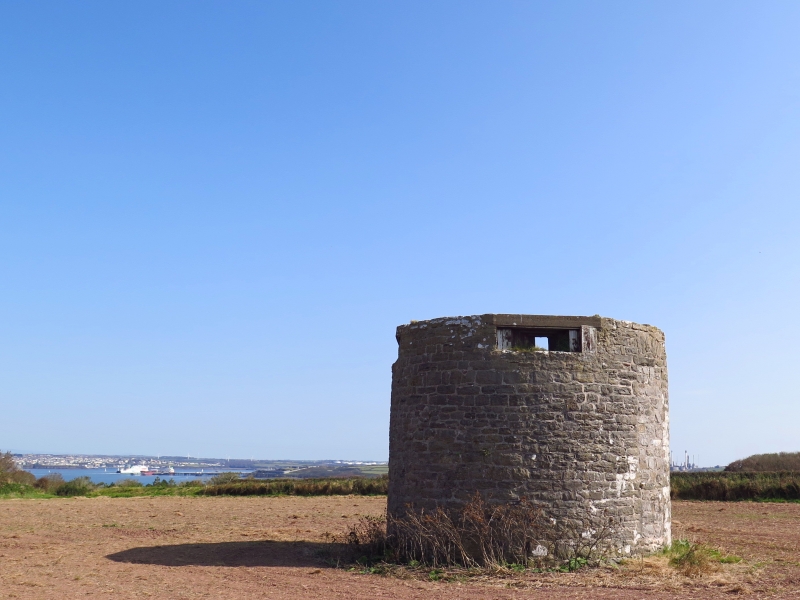 Location: In field E of B4320 road after turning N to approach the village.

A windmill is recorded here c.1600, but this structure may be C18. Probably derelict by 1842. In about 1941, with the establishment of Angle Airfield following air raids on Milford Haven, a battle HQ bunker was built about 40 m E of the windmill. The windmill was adapted to serve as a machine-gun post, probably because it had sufficient height for clear view over the nearby hutments.

Windmill: cylindrical base surviving to a height of about 5 m. Local stonework in irregular courses. Ground level entrance at E. Upper level original apertures at N and S, both now blocked with masonry. The latter openings have lintels with relieving arches above.
Wartime adaptations: The interior reinforced all round with brickwork. Step-irons for access through a manhole to the upper level. The upper floor consists of concrete laid on corrugated iron sheeting over re-used railway rails. Bricks around manhole. Four apertures with concrete lintels and with steel frames and shutters of which only traces remain, with wide external splays in wood and brick, to give 360o visibility. No roof.

Listed as survival of an C18 windmill with additional significance in relation to wartime bunker and airfield.