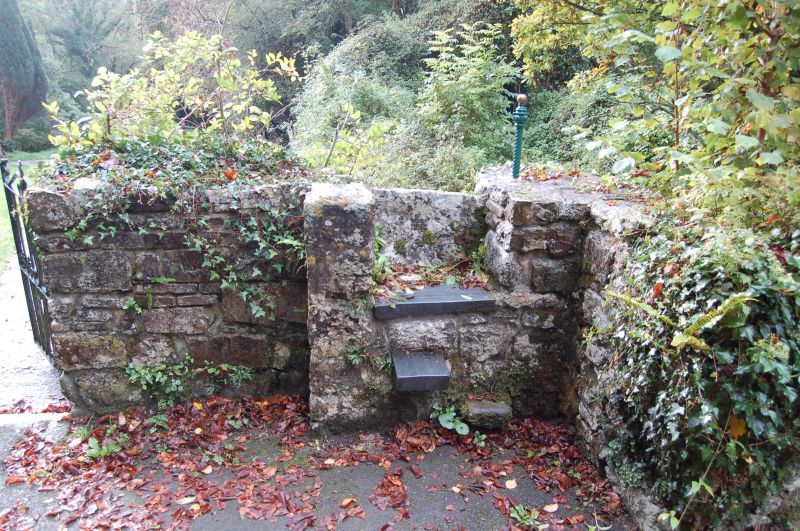 Gumfreston is traditionally Eglwys Gunniau, birthplace of St Teilo in the 5C. The church stands in a small valley just above the ancient wells. The low narrow chancel arch of the present building suggests a C12 date. The nave, chancel and the S chapel are probably of the C13, and the first documentary reference is in 1291. There was originally a S door to the nave. Later porch and tower.

Early-C19 illustrations show the nave roof had been replaced with a low-height roof, leaving its original gable walls at E and W curiously upstanding like high parapets. The rounded projection in centre of the N wall of the nave, opposite to the original doorway and possibly originally a baptistry, was at this time used for a stove with its flue through the roof. A stove pipe is shown on an 1855 drawing.

There was a restoration under the Rev. G N Smith in 1870, with very little attempt to impose C19 ideas of correctness. The E door to the S chapel, now used as a vestry, is dated 1870. The nave was heavily buttressed and a new timber roof installed. The simple Tudor windows of the nave were retained. The mass concrete vault of the tower was probably part of this restoration. The font was moved to its present position in front of the recess of the supposed baptistry.

A low, narrow church with a large tower on the N side. Porch at W with a round-arched doorway. Small chapel at the S of the chancel. The nave, chancel and S chapel are in limestone rubble masonry. There are remains of render on the N face. The tower and the porch are in uncoursed hammer-dressed masonry. At the foot of the walls of the chancel and the S chapel there is a slight batter. Three large buttresses support the S wall of the nave. Behind the middle buttress there is also a blocked door aperture with a pointed head. The roofs to the porch and the S chapel are of low pitch with thick slates. The slates of the porch have been rendered over. Elsewhere the roof pitch is steep with tile ridges and sandstone gable copings on kneelers. At the N side of the nave there is a small circular projection, also slate-roofed. Square-headed windows in the S wall of the nave, with stone surrounds and mullions. Two-light trefoil headed window in the S wall of the chapel. Round-headed porch door.

The tower has a battlemented parapet on a corbel table. The stairs turret is at the NE corner, lit by loops. The belfry has double square-headed lights facing N, E and W. It formerly had large square-headed windows with mullions to each storey but these are mostly blocked or reduced in area.

Small vaulted chancel with a single-lancet E window. Small square window in the S wall with a single sedile and piscina. Against the chancel-arch wall are stone benches. Encaustic tiles. Large pavement-tombstones at each side of the altar. To the S of the chancel is a chapel in which plain cross-ribs have been added to disguise a vault of conventional barrel form. Low and narrow chancel arch.

The nave has a C19 timber roof with two large tie beams. Oak pews. Pulpit at the SE corner. A panel of old wall-painting is displayed on the N wall. It is said to be a stencilled representation of a martyr with implements of torture, but very little detail is now discernible. It may depict St Lawrence of Rome, to whom the church is dedicated. A high-level slit window in the W wall of the nave suggests there was once a gallery in the nave or a loft to the porch.

The N transept or tower base is roughly vaulted in mass rubble concrete with shuttering marks. In the E wall is an arched recess possibly for an altar and a niche. A large passage-squint joins the transept to the chancel. In the W wall is a tomb or an Easter Sepulchre. A circular staircase in the NE corner leads to the tower. The 2nd and 3rd floors of the tower have been removed. There are sockets and projecting corbels for these missing floors. The 3rd storey was used as a dovecote: there are four rows of seven nesting holes. The 4th storey has a modern belfry floor.

The porch contains benches at each side. Over the door is a statue niche and a small high-level light into the nave. There is a water stoup in the SE corner.

Memorials to the Williams family of Norchard beside the altar, one dated 1692. On the N wall of the chancel is a brass tablet to the Rev. Gilbert Smith, Rector from 1837 to 1877. The windows are of plain glass.

Listed Grade II* as a simple church retaining its medieval character, with a very large tower, a well-lit interior and an early chancel, and forming an historically important group with the ancient holy wells.