A Grade I Listed Building in Manorbier, Pembrokeshire 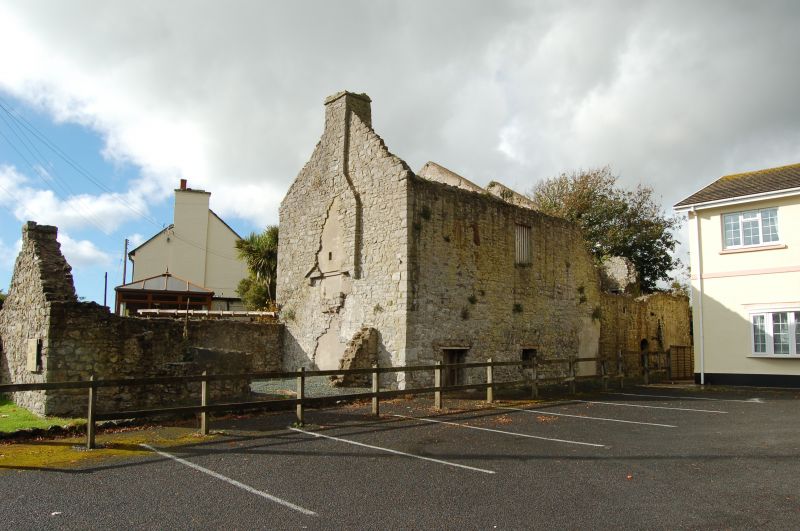 Location: At N of the A4139 in the centre of Lydstep Village, immediately opposite to Lydstep Tavern.

One of 2 mediaeval houses which survived in Lydstep until the late C19. It has been credited with prestigious origins. It was known traditionally in the vicinity as the 'Place of Arms', and that name may have been corrupted to 'palace'. Whatever its mediaeval origins, it was probably the place where the manorial court of Manorbier and Penally was held. The large field immediately to its N is Longstone Park; the Palace is marked as within this field on the Bush estate plan of 1772. The manorial court was known as 'curia de Langstone'.

A cottage was appended to the S end of the building and occupied down to the C19. It survives in ruin. Another cottage, adjacent to the NE side, is hinted at in Barnwell’s description, but of this nothing remains.

Barnwell (1867) provides a valuable drawing of the Palace. He shows that the external stairs were then in place, the windows to the parlour were barred or had small sashes, and the parlour was roofed in thatch. The SE gable chimney was complete with a stone capping. He also shows, but does not comment on, a corbelled projection probably for a lateral fireplace in the SW wall of the ruined hall. His illustrator ignored the cottage at the SE end and any other post-mediaeval appendages there may have been.

The Palace is an elongated building aligned NWSE. Containing an undefended first-floor hall with a second room which was apparently a parlour. The undercroft is vaulted, in
2 unequal sections, the longer vault being longitudinal. Limestone masonry, roughly coursed.

The entrance to the smaller basement from the NE side has a round-headed doorway with roughly shaped voussoirs, and a corbel to the right which may have supported a porch roof. Another doorway has been more roughly formed to its right, and there is a very small window between.

At the W corner of the smaller basement is an annex of small size also with vaulted floor above, probably the undercroft of a latrine. There is a SW window to the little passage connecting the annex to the room.

There are 2 windows and a portable door on the same side serving the larger basement. This basement has a probably later mid cross-wall. At the SW side is a window below the vault. The stairs were external, against the SW side, but have long disappeared.

In the gable wall of the parlour is a chimney supported on corbels at first floor level. In the vicinity of this gable are remnants of a slate roof. Two windows in the SW wall with splayed embrasures.

The upper part of the building is heavily overgrown.

Listed Grade I as a mediaeval first floor hall and a building of considerable historical importance.