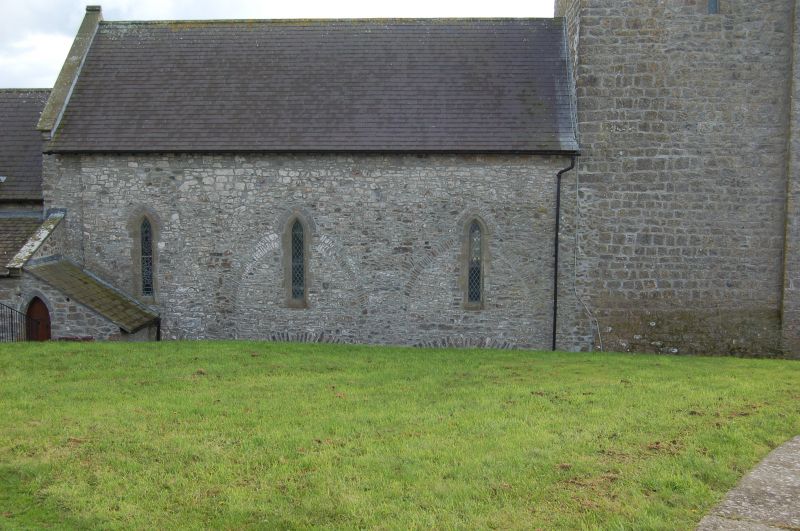 History: Late C13 nave, perhaps C14 porch, original chancel and S transept, in local limestone masonry. The nave has a steeply pointed vault. Corbels in the porch show it had an upper floor, now lost. There was also formerly a N aisle, demolished in 1770, the arcade of which is visible externally. There appears to have been a rood loft.

Restoration undertaken by Lord Cawdor in 1855, with David Brandon of London as architect. New chancel added, and windows throughout renewed in lancet style. Minton tile paving in the Chancel features the Arms of Lord Cawdor and those of Bishop Thirlwall of St David's. Wide chancel arch on Early English corbel caps.

A large tower added probably in C15 in large-coursed rubble masonry, battered at the base. Stairs turret at NW corner of tower. The ground storey of the tower is vaulted at a height almost equal to the height of the vault of the nave. The upper storeys are formed as octagonal vaults, the lower of these on thick ribs with chamfered arises. Parapet carried on corbels. The original W doorway in the tower is blocked.

An octagonal stone spire standing well within the parapet was built on the tower c.1870 by the Admiralty, as a navigation landmark, replacing an earlier timber one.

Further restoration was carried out under the Castlemartin Trust, established in 1986, to provide an interdenominational church for the British and German troops at Castlemartin Range. The altar was made in Bergen, Germany, incorporating a stone altar slab from Rhoscrowther. Font on a round pillar and square base, its cover also made at Bergen. Mendelssohn's organ was repaired and installed in the nave in 1988.

Listed as a restored mediaeval church with a fine W tower and spire.