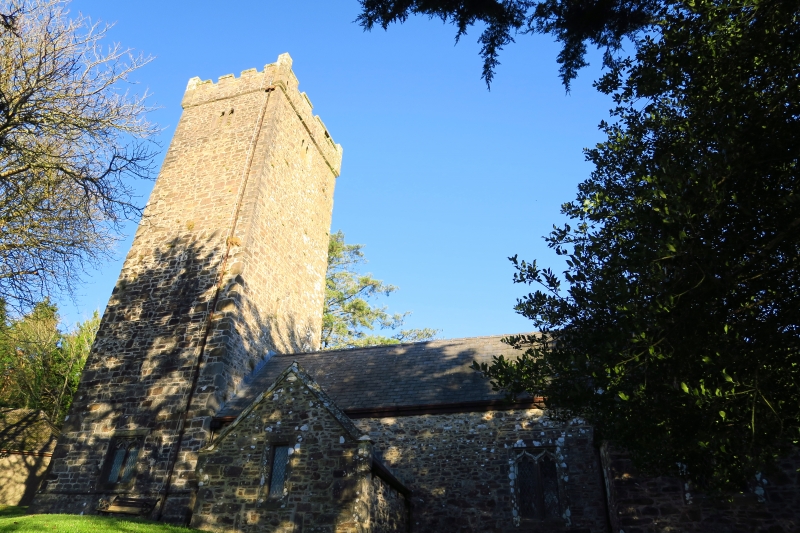 Location: In village of Begelly, 0.5 km N of the A477(T). The church is in a large churchyard with low stone wall, stile and lychgate to N.

A church probably of C13 origin, built in close proximity to an early mediaeval ringwork. Its early dedication is uncertain, but now taken to be to St Mary. Of the mediaeval building only the tower and the walls of the body of the church survive, with very few architectural details. It was partially repaired in 1845, early in the incumbency of the Rev. Richard Buckby.

The church was visited by Glynne in 1845. He described the tower as tall and rude, with a clumsy battlement and no string course. From his description it is known that most of the windows in the church were then of the sash type and there was a wall with a mis-shapen pointed arch separating the nave from the N chapel. His description of the masonry of the chancel and chapel windows shows that they were imitated in the subsequent restoration: the E window was Middle Pointed, of two lights, the S window of the chancel a trefoiled lancet, and the E window of the N chapel square-headed.

An extensive restoration was carried out in 1886 under the Rev. Frederick Ball. The architect was E M Bruce Vaughan of Cardiff. The church was said to be in very bad repair, and the restoration estimated to cost £850. The final cost was £1255, and the ICBS granted £25. Services were held in the Rectory barn during the work. The roofs were rebuilt throughout. The nave roof was restored to the level of an earlier roof indicated by marks on the tower. The doors and windows were entirely reconstructed. The old S porch was already in use as a vestry, and its outer archway blocked. It was a request of the Bishop that the original stones of the archway jambs should be retained and a small window placed in the blocking of the opening. Corbels indicating the positions of former roof trusses were preserved and also the corbels and stairs of the rood.

Several perhaps C15 stray carved stones of the mediaeval church survived and are now displayed on the shelves of the windows. One is a mullion fragment, others carry six-petal flower motifs.

Tower, nave and chancel, with chapel at the N and a former porch and a transept at the S. The form is of interest with the chapel considerably overlapping the nave. The tower stonework is irregularly coursed with selected larger stones at the quoins. Other parts of the church are in a masonry of smaller stones, also irregulary coursed. The E wall has a slight batter at the foot. Only the former porch has larger stones at the quoins. The E face of the chancel and chapel is rendered.

Roof of thick slates with coped gables throughout. There is a carved stone cross finial to the E end and the stump of a cross on the E end of the nave.

The windows are generally pairs of trefoiled and ogee-headed lights under lintels. Only the window to the W of the tower has a hoodmould. There are trefoiled single lights to the S of the chancel, to the E and W of the S transept, and in two of the windows of the N wall of the chapel. There is also a small trefoil feature in the gable over the E window. In the former porch a square-headed light occupies the centre of the blocking of the old archway; the carved jambs are preserved for a height of about 1 m.

The nave doors to N and S are opposite to each other, that to the S now serving the vestry in the former porch. The best door is that in the base of the tower. It is more elaborately moulded and was evidently intended in the restoration for the principal entrance.

The tower is slightly tapering, and has a battered plinth below a string course near the base. The stairs turret is at the NE corner, projecting N only and of the same height as the main part of the tower. This gives a broad face to the tower towards the nave. There is a continuous corbel course at the base of the parapet and crenellations. Corner buttresses in the parapet suggest lost finials. There are paired belfry lights facing E, W and S, in the form of small lancets, and a single square-headed light to the N. The stairs are lit by slits.

Nave and chancel of the same width, with a large N chapel opening to both. Small S transept and a vestry formed in the former S porch. The nave is narrow and has two blocks of pews. Two steps down from the N doorway. The tower base is two steps above the nave. The whole of the body of the church roofed in the C19 restoration with braced collar-beam trusses. The only vault is the base storey of the tower, the vault opening directly to the nave. The chancel is level with the nave but there are three steps up to the sanctuary. The chancel arch is high and wide, pointed, with late gothic undulating mouldings. Corbels of the rood loft remain in place and corbels in the left wall at the opening.

The N aisle chapel is separated from the chancel by two pointed arches standing on a round column and half-columns with simple caps. The columns are scraped stonework but the arches are rendered and have chamfers. Five corbels of the former roof structure survive in the S wall.

Beside the N door is a stoup with a second recess in the wall above it. Carved pulpit at the right and a carved lectern, with St George, at the left. The font stands near the door: it is square with no carvings except a line at the edges and has probably been scraped. Circular pillar and plinth on a small square base.

The chancel floor is of encaustic tiles. Hardwood altar rails with no gate, on good decorative wrought iron standards. A carved reredos in gothic style. The E window has the only stained glass in the church, evidently contemporary with the restoration, unsigned and anonymously donated. There are two corbels of the former roof structure in the N wall. The N chapel is now a Lady Chapel, the sanctuary fittings of which have been brought from the closed mission chapel of St Mary, Kilgetty (dedicated 1893, closed 1986). Opposite to the chancel arch are the steep stairs of the rood access and the opening at high level to the nave.

Listed as a largely mediaeval church with a good tower and several surviving original features.