No 1 Lexden Terrace, including area railings 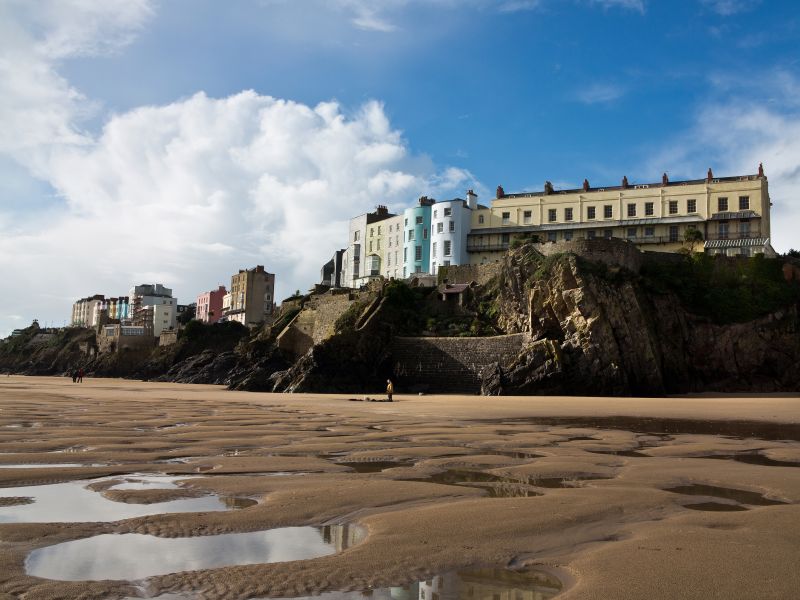 Location: Lexden Terrace lies at a tangent to the E side of St Julian's Street, the rear overlooking Castle Sands, all set back behind a forecourt wall.

Lexden Terrace is the finest of the Tenby terraces. Nos 1-5 were built in 1843 to 1845; No 6, Lexden House, is slightly later, but complete by 1850.
Nos 1-5 were built for John Rees (1801-1855), a ship's captain of Tenby who made the first accurate charts of the Chinese coast, which were used in the First Opium War. Rees made his fortune trading opium along the Chinese coast, investing the money in property in Pembrokeshire.
The builder was John Smith of Tenby, from a long line of Tenby craftsmen. The architect is unknown, but there is evidence to link the plan form of the houses (which have lateral staircases) with examples in the Clifton area of Bristol, and a possible family link with Samuel Burleigh Gabriel, architect of Clifton, where Rees had leased a house. Nos 1-5 cost £3,174 to build.
Rees had married Emma Brown in 1842, and they lived at No 1, letting Nos 2-5 on long leases. After Rees' death in 1855 the house continued to be occupied by his widow and daughter until 1862. The daughter married in 1862 and as Emma Knox Maitland became know as a prominent educational reformer. She sold Nos 1-5 in 1922 as individual houses.
No 1 was owned in the 1920s by Frederick Craven JP, Bradford worsted manufacturer, whose family had leased the house for holidays for 60 years. Sold in 1939 to Geraldine Lawrence, a London society hostess who entertained many of the nation's artists and literary figures here.

The first house of a stuccoed terrace of 6 houses. Each house of 3 storeys and basement, 2 bays, flanked by giant Ionic pilasters on upper 2 floors, rising from band over ground floor. Extra pilaster between Nos 5 and 6. Full entablature with moulded cornice and parapet, slate roofs and brick chimneys. Twelve-pane sashes to upper floors, ground floor openings not aligned, with door to left and tripartite sash to right with unusual glazing pattern of marginal panes around an elongated octagon. No 6 has channelled ground floor, openings aligned with those above, and Ionic portico.
Flight of steps flanked by wrought-iron railings with uprights of scroll design to each doorway. Stuccoed shouldered doorcases with cornices, doors of 2 long panels and overlights with tracery similar to ground floor window.
Area iron spearhead railings similar to those before Nos 1-3 Rock Houses and No 10 Bellevue in Crackwell Street; similar railings to forecourt of No 6.
To right recessed addition linking to No 7 Rock Houses, and low screen wall with 2 arches, one blank, one with Gothic panelled door.
Rear elevation is painted stucco with parapet and continuous first floor balcony with decorative cast-iron railings, pierced open-work uprights and lead tent awning. Lower one-bay link to No 7 Rock Houses has arched window each floor.

Graded II* as part of the finest terrace in Tenby.