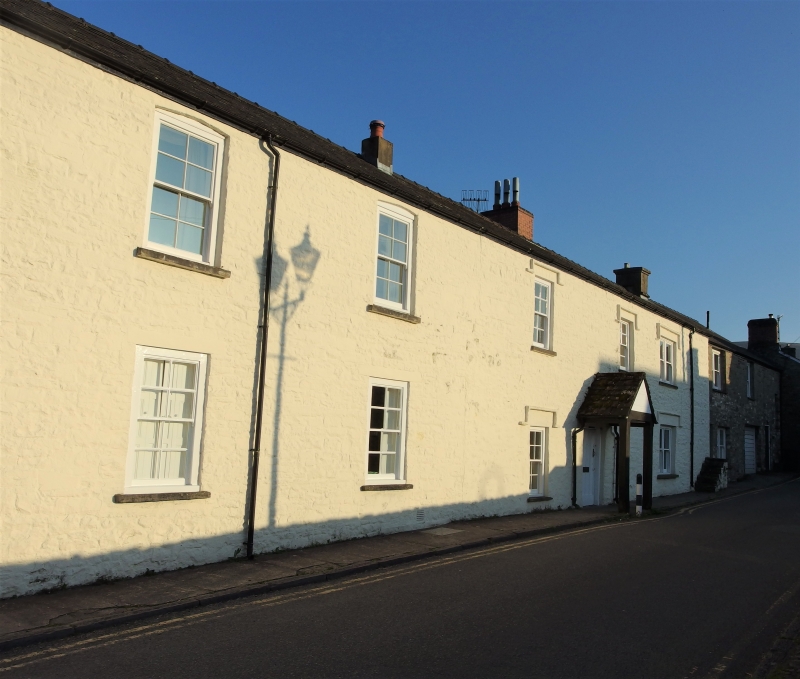 Location: Located in the centre of Llangattock village, 80m S of the Church, on the road which leads out to Ffawyddog.

Former Public House built in three phases. The oldest part is at the S end and internal features suggest a C17 date. The middle part is probably C18 to early C19 and is characterised by hoodmoulds to the front. The N section is Victorian. The house was a pub until the mid C20.

A long 5-window, 2-storey range with cellar. Constructed of cream painted rubble masonry under a slate roof with masonry end stacks and a rebuilt brick stack just R of centre. The panelled, ribbed front door has a timber lintel and is under a gabled porch supported on 2 timber posts. It is L of the ridge stack (suggesting that the C17 house had a chimney-backing-on-the-entry plan). The windows are not regularly spaced reflecting the development of the house. They all have stone sills and contain 8-pane sashes, except for the S windows which are wider and have paired sashes. The windows flanking the front door and the 3 windows above have stone hoodmoulds, and belong to the middle phase of building. The windows in the N unit have segmental heads to the upper storey and concrete lintels to the lower storey. A mounting block is situated against the S end of the front, and consists of 6 stone steps and a platform. The gable ends are abutted by other buildings in the street. The rear is also 5-window. The earliest unit at the S end projects beyond the other 2 units. It has wide centrally-placed windows to each storey containing 12-pane sashes and a planked door to the L. Otherwise the rear is a continuous facade and contains 2 doors, that to the N unit being panelled and half lit under a segmental head. The window openings are of different sizes and height; most contain 8-pane sashes or contemporary 4-pane windows, except for the upper storey of the N unit which has a small 2-pane sash and a 3-light metal framed window to the R.

The front door opens into a passage running parallel with the front of the house. To the R is the stack and entrance into the S unit, which has chamfered cross beams with cut stops, and a flagstone floor. The fireplace has an overmantel of decorative oak panels with fluted pilasters and circles. To the R are the curving stone fireplace stairs. The former bar of the Public House is located in the SW corner of the room. The central unit, behind the entrance passage is the kitchen. Curving stone stairs aligned with the front entrance lead down to the cellar. The N unit has panelled shutters, a panelled ceiling with decorative rose and a stone fireplace.