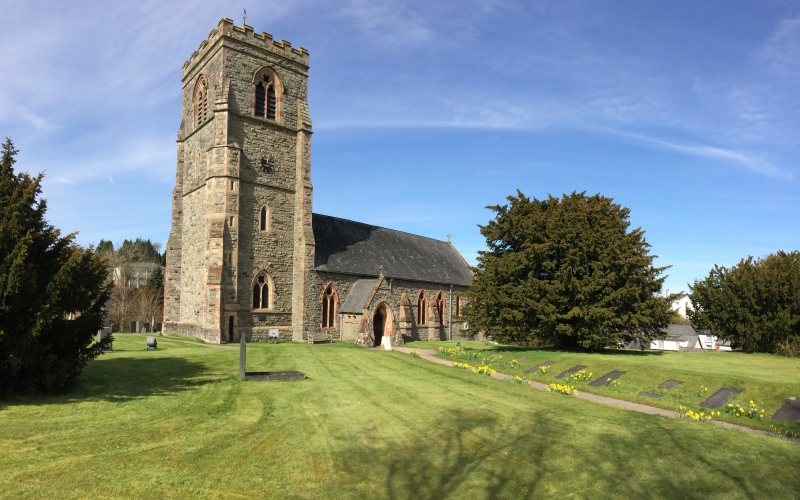 The church occupies a central position within the town. Burgage plots lining the main streets form a triangle around medieval churchyard. Within the churchyard, to the SW of the S porch is a bronze sundial made in 1775 by Samuel Roberts, a noted local clockmaker. It is set onto a C20 plinth of Portland Stone. To the N of the church is a holy well dedicated to St. Mary. A War Memorial is set into the S wall of the churchyard, in High Street.

History: Built to the designs of Mr. Edward haycock of Shrewsbury, at a cost of £1,900 to
replace an earlier church, said to have originated in the C11. The present building incorporates the mediaeval roof construction, early C13 S doorway and other fittings from it . In 1885 the W tower was completed to the design of A.E. Lloyd Oswell, architect, of Shrewsbury, to replace the wooden tower which had been retained until 1884.
Exterior: Geometrical style with nave and chancel under one roof, W tower, N aisle, and S porch. Built in snecked stonework, rock faced, with red sandstone dressings. Slate roof. 3- stage tower defined by string courses, with embattled parapet. Diagonal buttresses to W and angle buttresses to E.Octagonal stair turret in SW corner. Windows are generally 2-cusped lancets under a single quatrefoil, or plain cusped lancets. Clock by Benson, London, in middle stage, S side. S doorway Transitional, with two orders of triple shafts with bowl shaped capitals carved with foilage. Square abaci supporting 4 heavy roll mouldings which form a shallow pointed arch. Some mouldings and columns are filleted. Nave and chancel buttressed, with offsets and saddleback copings. Windows generally cusped lancets, frequently under quatrefoils.

Listed because of its unusual Traditional S doorway, and other medieval features including the roof, font and effigy. Important for its townscape, historical and group value.