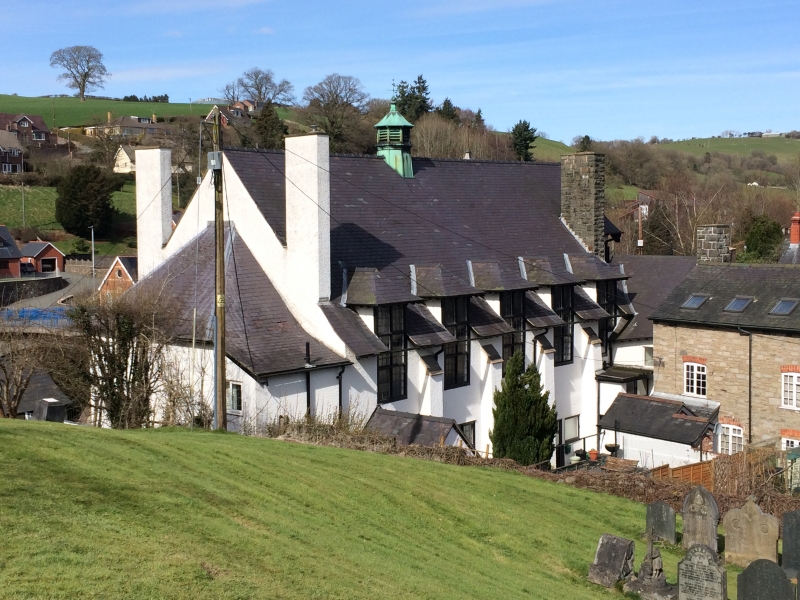 Location: Located at the lower end of the Street, close to the Banwy/Eithon Bridge. The building replaced a group of timber framed buildings on the site.

The Institute was built in 1913 as a gift by Mrs. Edward Davies, mother of David Davies, M.P., and her daughters. The M.P. made a speech at the opening ceremony explaining the aims of the Institute which were to provide a counter-attraction to the Public House. The facilities included refreshment for farmers on market day together with a room where they could transact business. The architects were Dickens-Lewis and Haynes of Shrewsbury working in a late Arts and Crafts style. The cost was £5,000. It was opened on 15th October 1913.

Stair tower of dark rock faced Penstrowed stone with limestone dressings, elsewhere timber framed with pargeted panels on brick, with plaster devices, and the hall partly roughcast. Slate roofs. The street frontage comprises a 3-storey stair tower on the right, a recessed 3-storey central timber-framed section containing the entrance, and a framed left section containing the lower meeting room, the 'farmer's room', gabled and set forward to the street line. The entrance has a moulded timber doorcase with bracketed canopy. Three-light leaded windows to first floor, and 2-light to top floor with plank shutters. Stair tower has cross windows at first floor and 20-light window above, both leaded, with stone label with dropped ends. The left block is of 2 storeys, with a through passage at the left end to a small open rear courtyard and the caretaker's lodging, having a timber arch with caged pendant at the street end and iron gate with dragon motif. A jettied cross-braced gable on brackets, and, above the three-light window on ground floor, a canted oriel beneath the jetty. Large 4-light window over the porch. The N side elevation has pronounced roughcast raking buttresses at each truss line, each bay having double transomed 2-light windows each side. The rear elevation carries roughcast chimneys at the ends of the gable, and a narrower extension containing the public hall stage and emergency exit.

The entrance hall has a coved cornice enriched with devices of the British kingdoms, and plaster vine-scroll margin around the ceiling. Tiled floor. A wide corridor extends to the rear, giving access to the billiard room and news room, now the branch library. Rising from the hallway, the stair has four-centred arch, leading to the stair well, rock-faced internally with windows with slate sills, the stair having an oak handrail on iron balustrade, extending to second floor level and providing access to balcony over the Public Hall. The Public Hall, at first floor level, is entered by double doors below a balcony supported on heavy scrolled brackets, and extends for 5 bays to the back of the site. Hammer beam trusses of 10.6m span, with pendants and arched brace collars. Panelled dado and parquet floor, carried on hollow bricks with iron reinforcement.

Included as an important public building in a sophisticated Arts and Crafts style having group value in the townscape of Llanfair Caereinion.