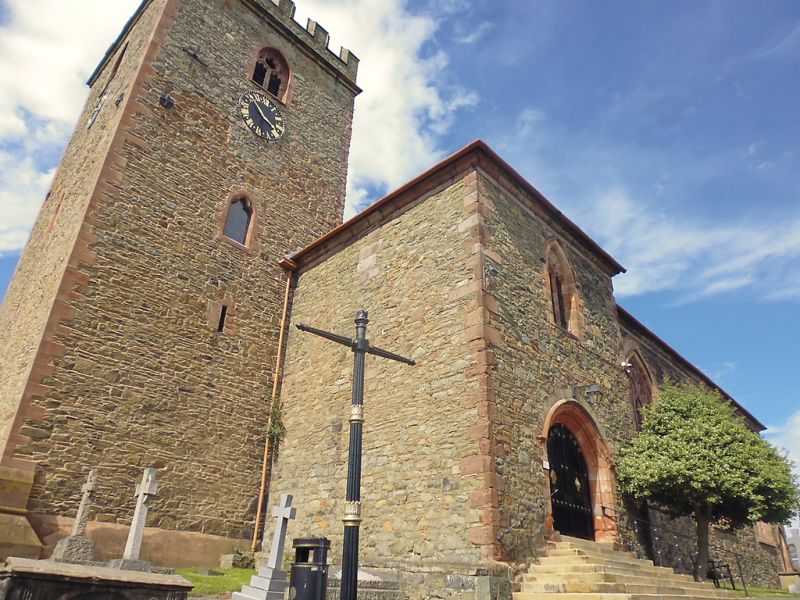 Location: Above the road in a steeply climbing churchyard.

History: The earliest references to a church here occur in 1253 - a probable refoundation by Gruffydd of Powys, patron of the town and grantor of its charters. Of this early church, part of the W tower survives; the present nave and N aisle probably occupy the area of their predecessor and may incorporate some of its fabric. Its S wall was probably on the line of the present S arcade - an early wall was removed from the SW of the nave in C19 restoration work, and the footings for its continuation to the E also uncovered. It has been suggested that the chancel was added c1350, but while its N and S windows appear to be C14, they also seem to be inserted in earlier fabric, suggesting a possible C13 date; the S porch may be a C14 addition. In the C16, the earlier form of the church was altered by the insertion of new arcades, adding a S aisle, and probably subdividing the original nave to create the N aisle. A major restoration of 1773-7 saw further modification of the aisles which may have been re-built and were certainly re-roofed and re-windowed; the tower was also restored and raised in height at this period, and the nave - said to have been in a ruinous condition - was also restored or rebuilt. In 1856-7, John Billinge, architect, rebuilt the E wall of the chancel with a replica of its C14 window, and reroofed it to a steeper pitch; he also erected the present chancel arch. In 1869-71, a major restoration was carried out by G.E. Street: the nave roof was rebuilt to a new pitch, the arcade extended to the SW to include the S porch within the body of the church; the nave floor was lowered and the organ chamber added; this restoration also involved the extensive refenestration of the church, and a comprehensive re-fitting of the interior. The W gallery of 1813 was removed, but the S aisle gallery of 1821 and the N aisle gallery of 1822 were not removed until 1927 and 1947 respectively.

Exterior: West tower, nave with 2 aisles incorporating storeyed S porch; chancel and gabled organ chamber. Mostly random local rubble with ashlar dressings, and slate roofs. West tower is of C13 origin in its lower section - the rebuilding of the upper stage in the C18 is visible in the masonry: random rubble, the red sandstone dressings probably C18. Undivided 3 stages, with 2-light chamfered window (C19) in W wall, and plain round-arched doorway to N. C19 foiled windows in second stage, and clock below 2-light foiled bell-chamber openings above. Embattled parapet above moulded cornice; ornately wrought C18 weather cock. Hipped roof to N aisle, which has 3x3-light windows with reticulated tracery (inserted as part of G.E.Street's restoration), and a W doorway which may date from the earlier C19 restoration; steeply gabled organ chamber incorporates in its N wall a C13 window re-sited from the chancel: 3-lancet lights with round spandrel openings. S porch (originally storeyed) has hipped slate roof over moulded cornice; wide red sandstone doorway with polychrome voussoirs, and roll moulded and chamfered archway (an 1856 copy of the original); cast iron railed gates to porch, and C19 2-light traceried window above. S aisle set back only slightly from the porch: 3x3-light reticulated traceried windows (replaced in the restoration of 1869-71), all with polychrome voussoirs. Hipped roof with moulded eaves cornice. E window of aisle, and the larger E nave window are both 1869-71. Chancel articulated by buttresses has earlier reticulated traceried windows to N and S, and a 5-light reticulated traceried window of 1856 (a replica of its predecessor) in the buttressed E end. The enriched cornice was also added when the chancel was re-roofed in 1856.

Interior: C13 triple-chamfered W tower arch. Perpendicular nave arcades of 5 bays: red sandstone double chamfered 4-centred arches on shafts with flat mouldings and embattled capitals. Nave roof of 1869-71 has king and queen post trusses with embattled tie beams and cusped bracing. Boarded ceiling has heavy moulded cornice with quatrefoil frieze. Aisle roofs retain their C18 flat plaster ceilings and moulded cornices. Chancel arch of 1856-7 offset to N of nave: foliate capitals and corbels to wall shafts. Chancel is raised up steps which have encaustic tiled risers; low stone screen wall with foliate panelled decoration. Sanctuary raised up a further flight of tiled steps; wrought brass communion rail (similar to the hand-rail of the pulpit which was added in 1913). Wide chamfered and roll-moulded arch to organ chamber to N. Heavy moulded sedilia and piscina to S, with trefoiled arches carried on polished granite shafts. Chancel roof may be substantially of C16 date: moulded principal beams and joists form panels which have painted bosses at their intersections. It is reputed to have come from Strata Marcella Abbey, although this is unsubstantiated.

Fittings: Pulpit of 1877 to S of chancel arch: stone, with ribbed base supporting canted traceried panelling, with foliate panels. Brass rail to steps added 1913. Font of 1861: traceried octagonal basin on clustered shafts. Reredos of c1870, by Earp: alabaster, Caen stone and marble, with a series of foiled panels, the wider central panel enriched with fleurons, and with a high relief cross. Encaustic tiles in traceried panels to either side. Brass chandeliers in nave were originally fitted in 1776 - removed in the C19, they were restored and returned in 1975. Painted benefaction boards on W wall of S aisle, dated between c1715 and 1946. Relief panel of Royal Arms on W wall, 1802.

Monuments: In the sanctuary: Sir Edward Herbert, d.1594: painted stone wall-monument, paired round-arched panels (containing painted shields in low relief) with text in lower panel, set in an aedicule; Edward Herbert, Second Earl of Powis, d.1848: designed by Sir G.G.Scott: a recumbent effigy in a richly worked embrasure: the alabaster effigy is by Edward Richardson, carved chest with brasses by Waller; the arched recess carved by J.B.Philip. N aisle: Edward Herbert, Third Earl of Powis, d.1891: an alabaster effigy on a chest in a moulded arched embrasure. Various marble wall tablets in S aisle, and a number of brasses, including 2 of C17 date.