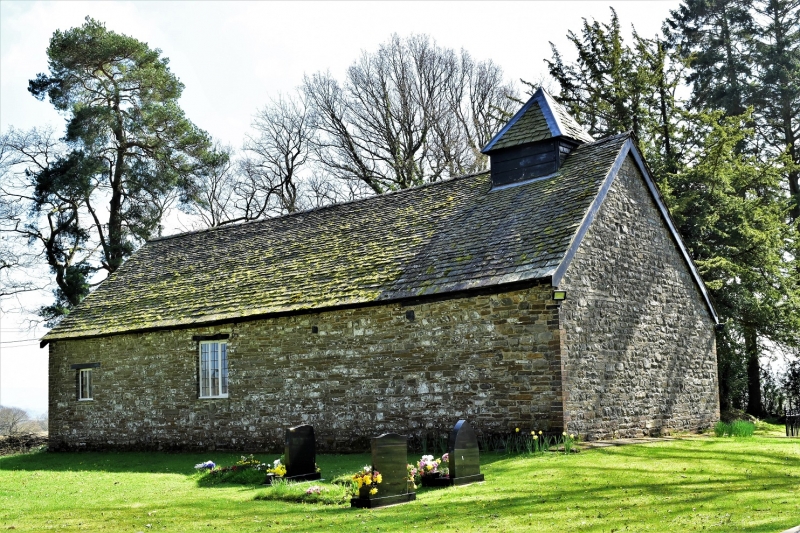 Location: In a round churchyard on the E side of a minor road approximately 2km N of Llanyre.

A medieval church, although the oldest part of the present building is the C16 or C17 roof. The church was partly rebuilt c1812. The E window was added c1854. Box pews and pulpit are said to have been brought from another church in the early C20.

A small parish church comprising nave, chancel and W vestry under a single roof, of rubble stone with brick quoins, and graded stone-tile roof. A square bellcote set back from the W end has weatherboarded sides and pyramidal stone roof. Most openings have wooden lintels. In the S wall the entrance to the nave has a door with narrow Gothic arched panels. To its L is a 9-pane vestry window, in a brick surround. A 2-light chancel S window has diamond-pane glazing. The pointed E window has Y-tracery and small-pane glazing in a brick surround. On the N side is a 2-light chancel window with leaded lights and a similar but larger 3-light nave window incorporating a metal casement.

Nave and chancel have a 5-bay arched-brace roof incorporating cusped windbraces, in 2 tiers on the N side. A stone wall to eaves height divides nave and vestry, which is infilled with lapboarding in the roof space.

The interior is laid out in Georgian style. The panelled pulpit and reading desk are in the centre of the N side of the nave. Wooden box pews have mostly panelled doors, one with raised fields, but other woodwork is partly panelled, partly plain boarding. C19 3-sided altar rails are in early Georgian style and have turned balusters and moulded square posts with ball finials. On the L side of the altar is a cupboard with an iron door. The post-Reformation font has a round bowl and broad stem (although it has also been interpreted as a re-used medieval stoup).

Listed grade II* for its special architectural interest as a small parish church with fine late medieval roof, and notable for its internal plan, retaining the seating arrangements common in churches before the ecclesiological revival of the C19.