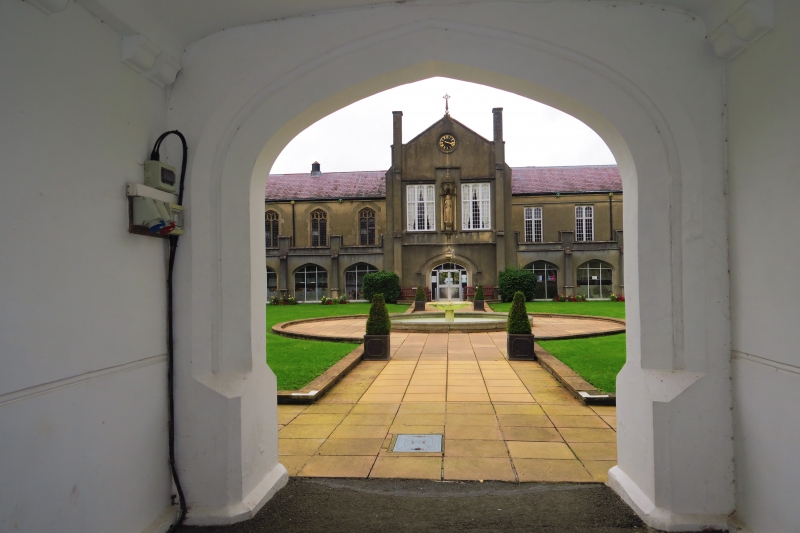 1822-7 by John Foster of Bristol, using earlier 1819-21 designs by C R Cockerell, the pre-eminent neo-classical architect of early/mid C19 Britain. Lampeter was the first university college founded in England and Wales since Oxford and Cambridge; it was established by Bishop Burgess of Saint David's and J S Harford, owner of the Peterwell estate, Lampeter, for the education of future Anglican clergymen unable to afford the English universities. The collegiate design is based on C17 Oxford prototypes (eg St John's, Brasenose and Oriel Colleges); the plan form has an entrance tower, accommodation for students on 3 sides (with access to the rooms via staircases form the quadrangle) and chapel and hall symmetrically placed on the 4th side. Departures from precedent include the siting of the Principal's lodging at the NW angle of the quad, outward facing, and a T-shaped projection from the N side containing a first floor library at right angles to the hall and chapel and teaching rooms in flanking wings. Later C19 and C20 alterations, including remodelling of chapel and changes to hall.

The style is a simplified Tudor Gothic, rendered (with minimal use of ashlar) slate roofs and ridge stacks (rebuilt since in black brick). The 4 ranges cross at the angles to give a more picturesque corner treatment with projecting coped and shouldered gables set in slightly from the ends of the ranges and the S front has a flush entrance tower. Within the quadrangle are corner stair towers capped above eaves level with an octagonal shaft and lead ogee dome and the N hall and chapel range is elaborate with a big centre gable and long first floor windows to the library. The windows throughout are cast-iron, small paned and flat-headed, with Tudor-arched heads to each light, generally 2-light with painted cast-iron frames, but larger mullion-and-transom lights to end gables and small plain casement pairs to gable attics. Gables have stepped diagonal buttresses, main ranges have a moulded ashlar plinth at sill level, hoodmoulds to ground floor windows on outer facades, a continuous dripcourse over upper windows and a bigger ashlar moulded eaves course interrupted by painted cast-iron bosses with rosettes, a JSH monogram, or the college arms. Within the quad the walls of the 3 accommodation ranges are roughcast, not lined stucco, and there are no ground floor hoodmoulds. The staircase entries are unmoulded Tudor arches.

Outer Facades: S facade of 1-5-1-5-1 bays has centre ashlar 4-centred archway with narrow oriel above, and tower with attic window, stringcourse, recessed plaque with Hanoverian arms and battlemented parapet. The courtyard face of the tower is simpler, with 3-light mullion and transom window at first floor and no armorial plaque. The archways have hoodmoulds. Within quad simple 4-1-4 bay elevation with doors in second bay each side of centre and then in corner 3-sided towers. Quad E and W sides are plain 8-window range with 2 doors, while outside W front is 1-9-1 bays, similar to S but without centrepiece and with porch to Principal's house in angle to NW gable. Outside E front is considerably plainer, 1-8-1 bays, the gables ends quite utilitarian.

Staircases are plain dog-leg stairs with Jacobean style finials to bottom newels. Four doors each floor, to single room accommodation. Hall and chapel are separated by low-ceilinged hallway with steps down to chapel and up to hall and continuing N with staircase off to library. Chapel interior predominantly of 1879 but roof original. Roof of 3 bays with 4-centred arched trusses and 3-sided panelled painted ceiling. Ornate carved and painted Gothic wood organ gallery and side stalls with coved canopy carried around. Gallery has projected centre and organ has painted pipes. Colour scheme, repainted c1980 is predominantly dark green with gold for the intricate carving and red for stall back panels.

On N side of chapel a 2-bay arcade of 1879 with ashlar moulded pointed arches on circular pier to N aisle with side-facing stalls. Stalls in aisle have a big Tudor-rose head to bench ends, while those in main body of chapel have scrolled arm-rests. T G Jackson records reusing some deal stall elbows turned out from New College Chapel, Oxford.

Hall has Tudor-arched roof trusses similar to those in chapel, and is entered from E end.

Included for its special architectural interest as an exceptional group of educational buildings of considerable national historic importance and significant architectural quality. Important also for the association with two major architects.