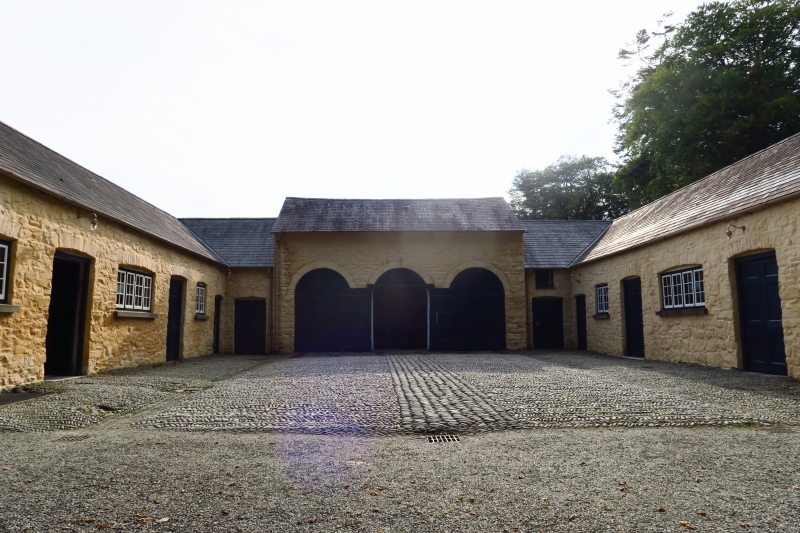 Location: The first of the extensive range of outbuildings at Llanerchaeron, some 100m E of the house.

Built c.1800 (shown on 1844 Tithe map). The (ruined) W wing was used in the early C20 as a battery house, where electricity was made from power generated by the water wheel.

Matching wings: most of the W wing has collapsed. Five bay courtyard fronts. E wing with, from N: W.D.W.D.W.D. The outer windows are 2-light 12-pane casements, the central wider, with 4-light 24-pane casement. Six-panel doors, lower 4-panel door to right. Cambered stone voussoired heads and stone sills. The three N bays of the W range survive and repeat the openings as above. Ends of wings each with blank round arched recess, that to E with painted glazing bars. E side of E wing with small mounting block towards N end. Window with cambered stone voussoired head. Three small rectangular recesses. Rear wall of wing with blocked door and 6-pane window, heads as above. To rear of remains of W wing is added W.C. Pitched stone forecourt.

To rear is small added square courtyard abutting garden wall. In NW corner is a small pit with slate steps, containing a brick lined furnace, which heated underground flues for the nearby nursery beds and cloche: a late C19 arrangement.

Group value with Llanerchaeron and other estate buildings.