A Grade I Listed Building in Llandovery, Carmarthenshire 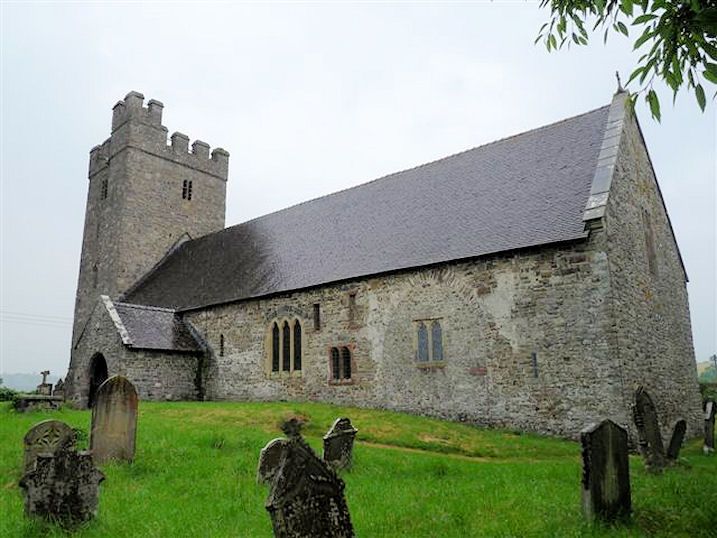 Location: Situated on small hill above the modern A483 in large churchyard.

Anglican church, former parish church of Llanfair-ar-y-bryn parish. C12 origins, using fragments of Roman brick from a Roman fort on the site. Possibly founded as a parish church, in the C12 a cell of Malvern Priory, but later a chapel-of-ease to Llandingat. Parish church in the C18-19 to the large Llanfair-ar-y-bryn parish, until 1883 when Cynghordy church was built. Imposing W tower, nave and chancel without division, S porch and added vestry and boiler room on N. Marks on chancel S wall of a lost SE chapel, apparently ruined in 1710 but possibly the Llwynhywel chapel called out of repair through the C18, and ruinous though still roofed in 1790. It is suggested that there was a N transeptal structure of the C12-13 removed before the C13 tomb recesses were built and that the chancel had a much lower floor than the nave, raised in the C13. Much rebuilt in the late C13 to C14 and restored in C15 after the Glyndwr uprising. The W tower is probably late C15, though overlapped by the nave corners. The S porch may have been C14, rebuilt in early C18, according to Caroe. A grant from Richard III in 1484 for building is recorded, perhaps spent on the tower, new windows and a rood screen. The nave was re-roofed in the C18 with a plaster ceiling, possibly in 1723 (Caroe). Some new windows said to have been inserted under Rev J. Hughes, vicar from 1846, certainly after 1851 when Sir Stephen Glynne only noted 'a modern excrescence' on the N side. This work may be the restoration of 1880, when Bath stone windows were inserted, the organ chamber added and roofs and floors restored. Tower restored 1907 and the rest in 1913-14 completed 1922-3, all by W D Caroe, who reopened several of the numerous blocked openings. Pulpit of 1922 by Caroe made by Dart & Francis of Crediton. Caroe supposedly removed an E window of 1880 and replaced it with a C15 3 light from N wall of nave.
George Borrow attended service in 1854, he noted the walls painted yellow and the pulpit on the N wall.

Anglican parish church, rubble stone with plain tiles (replacing stone tiles) to roof. Dressings of late medieval period mostly in red sandstone, C19 dressings in Bath stone, early C20 dressings in red sandstone. Nave and chancel in one with large W tower, S porch and N vestry and organ chamber.
Tower with SE square stair tower apparently buttressed by the SW corner of nave. Battered base with string course above pointed chamfered C15 W doorway, reopened 1906, with corbelling above, under the string course, below small pointed C15 W window of 2 lights with cusped heads. A similar C15 2-light on the S at mid level, and small pointed cusped lights on N and S at upper level under belfry stage. The belfry has small C15 2-light openings with square heads and pointed lights (the S pair restored with rounded heads), under a C15 parapet with small coved string course and large gargoyle spouts, and battlements, taller on stair tower. This has small slit windows. In 1851 according to Glynne the battlements were forked.
Nave and chancel form a single broad vessel. Nave SW corner has large quoins. Some fragments of Roman brick and tile in walls. S side has cusped lancet to left with medieval red sandstone head and 1913 jambs, then 1880 Bath stone 3-light window with lancets and relieving arch. S porch said to have been rebuilt in C18, but side stonework looks C19. Pointed chamfered entry has some medieval red sandstone blocks. Inside are stone benches each side, roof of 1880, and pointed chamfered S door, possibly C14, with the chamfer rebated to fit door, which may be C18, plank with cover strips. Holy water stoup to right with triangular head and projecting basin. To right of porch is small C12 single light, restored 1913, with roughly arched head, the voussoirs incorporating a Roman tile. Then another 3-light window of 1880. A projecting stone beneath may relate to blocked rood stair door within. Chancel, without division, has red sandstone 2-light window of 1913 with cusped arched heads to lights, and above 2 features restored 1913: to right some masonry splayed inward, apparently the jamb of a splayed reveal, and a plain rectangular light to left with 1913 leaded glazing and timber lintel. Big blocked pointed archway to demolished S chapel, with rough stone jambs and voussoirs, the blocking including by a late C15 2-light square-headed window with shields in spandrels and flat hoodmould (presumably reused from the demolished chapel). Finally a slit light to right with square head is set very low, all replaced in 1913, but probably late C13 to C14 in origin. E end has C15 sandstone window set high (apparently moved here from nave in 1913) of 3 lights with cusped arched heads. N wall has 2-light window to left, the heads replaced 1913, then a single cinquefoil-cusped light of 1913, and then an uncusped lancet of 1913. Above is a square small opening. Lean-to vestry on nave is pre-1851 to right, with flat heads and red sandstone voussoirs to 2 doors, one now a louvred window to boiler room. The E half is added, presumably c1880 for organ chamber, but has 1913 details, a square 2-light to N and a single light to E. To right of lean-to, nave has one 2-light window of 1880 and a plain square hole reopened 1913.

Tower has pointed barrel vault and pointed hollow-moulded C15 door to stair with chamfered stops to moulding. Tall pointed C15 tower arch. Upper stage of tower was 2 floors, perhaps priests room under ringing chamber, but the upper one has a fireplace. Nave W end has large pointed loft door over tower arch (access to upper chamber). Eleven bay nave roof, possibly C17, has 12 close-spaced broad collar trusses with arched braces, straight braces and wishbone struts over collars. Four rows of purlins. Nave E truss has timber-framing infill, chancel has pine boarding of 1880. Roofs restored 1913. Nave and chancel have plastered walls with faint traces of wall-paintings. Numerous square holes possibly put-log holes found and opened 1913.
S wall has one square hole to right, then cusped lancet in segmental-pointed rough reveal, C19 reveal to 3-light window, another square hole. S door has earlier C19 inner door with reeeded keystone to timber surround, then another square hole, then 1913 timber lancet in C12 narrow light with segmental pointed reveal, another square hole, a segmental-pointed former door to rood stair with renewed head and then the other C19 3-light window inserted in recess of former rood stair.
N wall has square hole to left, segmental-pointed reveal to part-blocked window, another square hole, jambs of blocked medieval N door originally with hollow moulded pointed surround with chamfered stops, broken for 1880 2-light window. Another square hole. a segmental-pointed blocked opening, fragment of wall-painting with chevron pattern, a fragment of a medieval tomb slab, a fragment of medieval carved wood with half a tiny carved face over low Tudor-arched door to vestry. Large 1880 broad segmental arch to organ chamber with vestry. One step to chancel with tiled floors and 1880 roof panelling in 8x6 panels, shallow cornice with bosses. Chancel has evidence that floor has been raised in that E wall piscina and remnant of earlier E window are at floor level. Sills and part of splays visible of 2-light E window, which Caroe thought base of a pair of late C12 to C13 lancets and reconstructed with rounded jambs and centre pier and stone voussoirs to low cambered heads. Fragment of C17 painted text to right over a square hole. N wall has C13 tomb recess or Easter sepulchre with low pointed head, and second recess to left, damaged by insertion of a square headed tall recess. A line of quoins above may be an indication of a lost N transept. A pointed top of a lancet window is visible to right over 1913 single lancet.
S wall has blocked S chapel arch with plain chamfered imposts, to right is jamb of a blocked opening over a red stone 2-light window with another piece of straight stonework in wall to right and 1913 deep-set rectangular leaded narrow light above.
Fittings: C15 red conglomerate stone font, octagonal bowl, chamfered beneath, on C20 stem. Altar table and credence C17. Pulpit 1922 by Caroe, timber octagonal on tapering base. Organ rebuilt 1880 by Bevington & Sons of Soho, with painted pipes, in Gothic case. Later C19 chancel stalls with cusped arcading to fronts. Brass eagle lectern c1896.
Monuments: In S porch E side a delicately lettered early C19 oval with no name but 'Je remets mon ame en ta main car tu m'as rachete', and red stone plaque to Thomas Powell died 1787. E side eroding plaque to Rev John Williams, Pantycelyn, died 1828, with motto 'A sinner saved' and note that this line was inserted at the request of the deceased. Plaque to right to Thomas Jones of Ystradwallter died 1762 and wife died 1767, with good lettering. Nave N above vestry door marble plaque with urn to Rev W Thomas of Pantyrhedyn, died 1853, by D. Beynon. Chancel S brass to Thomas Jones of Llanfair Grange, died 1901, detached plaque to William Williams of Pentwyn, excise officer, died 1799, plaque to Morgan Williams of Pentwyn, gent, died 1790, marble plaque to Jane Gwynne died 1802, and plaque to Maryanne Gwynne died 1818. Plaque to William Leeves of Tortington Place, Sussex, died 1870. N plaque to Mary Anne Gwynne died 1818 and to Col Sackville Gwynne of Glanbran died 1836 and his wife died 1888.
Stained glass: tower W window by John Petts to Major W Stewart of Llanfair House, 1972, sun in vibrant colours. Nave S fourth window has c. 1880 glass of Christ healing sick, in style of Hardman. Chancel S 2-light has glass by John Petts of 1965 to J L Stewart, killed 1940 with St George and dragon with swastika (the design said to be not by Petts). Narrow window set low to left has glass given by John Petts 1972 with letters 'CARDI'. Chancel N small single light by Kempe & Co c1924, St David, and 2-light to right by Kempe & Co 1931, Feed my lambs. E window of three lights, c. 1924 by Kempe & Co, Crucifixion with Rev Rhys Prichard and Rev William Williams, the figures on clear grounds.

Graded I as a substantial medieval church with intricate history of building and change from the C12 to the C16, with fine W tower and high degree of survival of medieval architectural features.