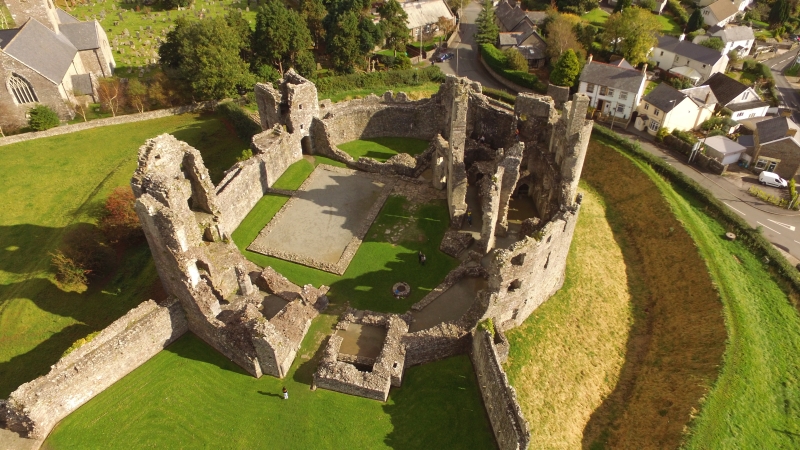 Founded early C12 as caput of lordship of Coity, granted to the Norman family of Turberville. The original timber defences were inside a circular ditch and were largely replaced in stone late C12. The keep and curtain wall, as well as the deepening of the ditch, belong to this period, during which time a bailey to W retained its timber defences. The keep was enlarged and a new domestic range was added C14. At the same time the bailey was converted to an outer ward with stone defences. It had a bank and ditch to the N, the main entrance to the W, and S, SW and NE towers. During this time the original ringwork remained open, but with a link wall to N between inner and outer wards.

The defences were repaired and strengthened early C15 for one of the Gamages, who inherited the castle in 1411, after damage caused during the Welsh uprising of 1404-5. To the outer ward a new W gatehouse was built, the S tower was converted to a gatehouse and a link wall was added between the outer ward and inner ward curtain walls. Inside the outer ward a large barn was erected. The ditch between inner and outer wards was infilled. To the inner ward a NE gatehouse was added facing the church. Improvements were made in the later C15 or C16 to the domestic arrangements, when the defensive requirement had receded. From 1584 to the early C18, when it was still partly inhabited, it was owned by the Sydney family, but it was largely in ruins by mid C18.

Ruined medieval castle consisting of a circular inner ward enclosed on N, E and S sides by a ditch and with a faceted curtain wall, on the W side of which is an outer ward with curtain wall, which is roughly rectangular in plan and has a bank and ditch on its N side. Of rubble sandstone with ashlar dressings.

The inner ward curtain wall rises mostly to parapet level. The keep is on the NW side, its W wall standing almost full height, in which fragments of C15 openings can be seen, as well as corbels at eaves level. It is of 3 storeys with undercroft. In the centre are two C14 octagonal piers superimposed one above the other, with the springers of rib vaults: the undercroft ribs are heavy and plain; the lower storey vault has evidence of chamfered ribs. Contemporary with this phase of the keep was a new W gatehouse, attached to the S side of the keep at an oblique angle. Its guardroom does not survive to any considerable height. On the N side of the keep is a 3-storey annexe, of which the N wall survives full height and stands beyond the line of the former curtain wall. The N front is 2-window, although the openings are poorly preserved. In the upper storey are a Tudor fireplace and the corbels which carried the principals. Traces of lime plaster can be seen on the inner faces.

On the S side of the inner ward is the C14 domestic block consisting of hall, passage, garderobe tower and kitchen range. On the inner (N) side is a dog-leg passage of 4 bays with the springers of chamfered rib vaults. In the 2 easternmost bays are openings: on the R is a vaulted passage to the curtain wall of unknown purpose; to L is a newel stair to the hall. The hall is S of the passage and is attached to the earlier curtain wall. The hall undercroft survives substantially. It is of 3x 2 bays with the footings of 2 central piers and the springers for rib vaults surviving. In the curtain wall 3 lancets with deeply splayed sills were cut in at undercroft level, the central of which is cusped. In the hall itself is a fireplace in the E wall. In the exterior S wall, the hall is 2-storey height with corbel table and has 3 windows in the lower storey (blocked to L, with Tudor hood mould to R). At the upper level the window to L is blocked by inserted C15 fireplace, when a first floor was added to the hall. The fireplace has a tall stack, which partly encroaches on an arrow loop in the exterior face of the parapet, and has string courses and a moulded cap. A similar tall stack rises above the vaulted passage on the N side. SE of the hall is the C14 garderobe tower, built outside the line of the curtain wall above the ditch. The tower is roughly oval in plan, with a corbel table on E and W sides above cesspit level, where the tower has straight side walls. The 2 upper levels have ruinous openings and garderobes. The tower is reached by stone steps from the hall undercroft. On the W side of the S domestic block is a kitchen range principally C15 in its details. It is of 2 storeys with undercroft. In the upper storey it has 3 windows (of which L and central have square heads), in the lower are 2 windows (square-headed to L and with traces of arched-headed lights). In the undercroft is the base of a circular malting kiln with radiating flues.

The chapel is on the NE side of the S domestic range and is entered from the dog-leg passage. It has a narrow, ruinous C15 E window (probably originally of 2 lights), above which is the line of the gable. The line of an earlier, lower gable of C14 is also visible. The interior of the chapel survives only at basement level, in which there are 2 low cross walls butting the side walls.

The C15 NE gatehouse is 3-storey and projects beyond the curtain wall. It has a doorway under a 2-centred arch with square hood mould. Above is a 2-light mullioned window, and in the upper storey is a larger window, above which are 2 moulded corbels. The side walls have plainer corbel tables. The rear elevation has plainer openings.

The inner ward has some stone paving and a well. On the N side are the footings of a large rectangular building of unknown date, possibly a late medieval hall replacing the earlier C14 hall.

The outer ward curtain wall stands to a considerable height. The W gatehouse was added C15 and is now the main entrance. Only part of the inner arch survives, as on the S side the building does not survive above the footings. The SW tower has two arrow loops in its outer wall but now has a lean-to slate roof. Immediately E of it is a doorway in the curtain wall with 2-centred arch. Only the footings of the NE towerand S gatehouse survive. Beyond S gatehouse is a single-arched bridge over the ditch. The link wall between S gatehouse and inner ward is C15, has eightarrow loops and remains of a storeyed projection at the angle with the inner curtain wall.

Listed Grade I as an important example of medieval defensive architecture in Wales, successive phases of which document the changing emphasis from defence to domesticity.