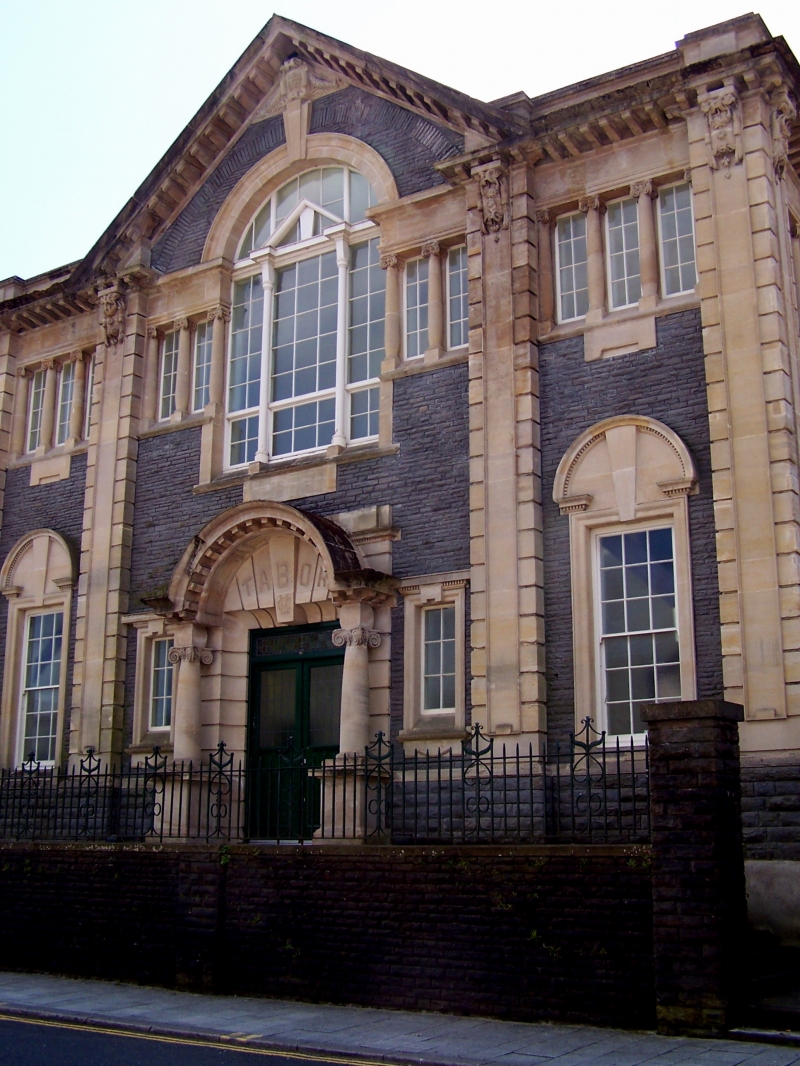 Location: Located prominently in the S part of Commercial Street, elevated, with the gable front to the street.

Designed by the well-known chapel architect, W. Beddoe Rees of Cardiff, and built in 1907-8 by Lewis Williams, contractor, to replace an earlier chapel of the Calvinist Methodist community built on the same site in 1840. It is known locally as the place where the Welsh National Anthem was first sung.

Built in coursed grey rubble with Pennant stone dressings. Slate roof. The front elevation is raised, behind a railed enclosing wall. In a rich Beaux Arts style. Wide central gabled bay with narrower side bays, articulated by rusticated pilasters. Central entrance; a pair of doors set in concave jambs, in a channelled rusticated base, and under a semi-circular modillioned canopy, rising from squat Ionic-derived columns with pronounced entasis and a pulvinating frieze. The spandril is rusticated radially, with a pronounced key stone, and is inscribed TABOR, with MC on the key. To either side, 6-paned architraved windows and dentilled cornices. The side bays have 18-pane sash windows within architraves and exaggerated cornice with keystone. The upper level of the elevation has paired central round-headed windows rising into the modillioned pediment, and a continuous line of paned windows divided by Ionic type columns as the door below, but reduced in scale and carrying a deep plain architrave and modillion cornice. The pilasters have ineffable carved decoration at the top. The front of the chapel returns by one bay at the ends. Sides rendered, with paned windows.
The front forecourt is raised on a rock-faced stone retaining wall and carries iron railings with decorative stanchions. Gates to steps at each end.
Sunday School and Vestry to rear, with hipped roof and margin glazed windows.

Not accessible at the time of inspection January 1997.

Included as a major chapel design of this nationally important chapel architect, author of 'Chapel Building'.