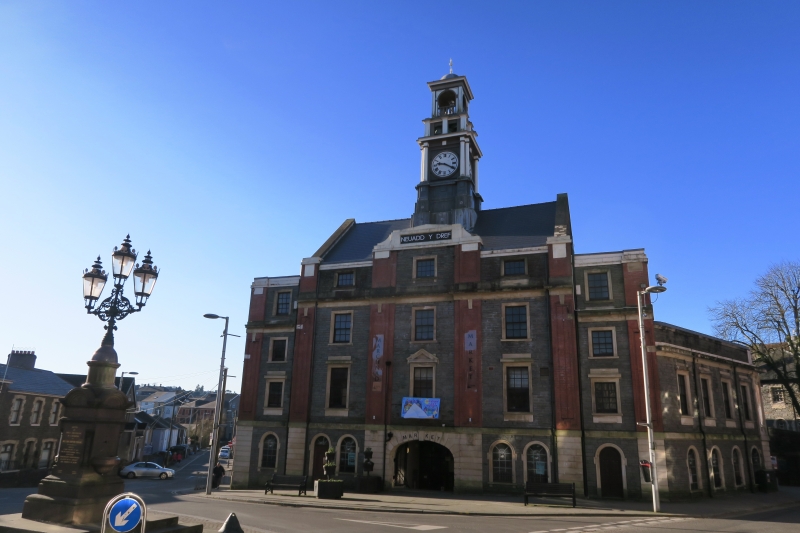 Location: Located at the E end of the street, facing NE over a triangular market place.

Designed by Henry Harris of Cardiff in a Queen Anne style and built in 1881 to provide a covered market and assembly rooms for the growing community of Maesteg. The front, which was originally bowed and approach by a wide flight of steps, was remodelled by S J Harper in an austere classical style in 1913-4.

The original building was built of stone with red Ruabon brick detail, and was elevated to provide a covered market under, and to compensate for being at the low end of the 'square'. The 1914 frontage is of similar materials, rock-faced rubble, with the plinth dressed with channel rusticated limestone. Slate roofs. Four storeys, symmetrical, 5 window bays, the centre three set forward of the 2 narrower end bays, and side wings sloping sharply back to follow the line of Talbot Street and Church Street either side. The main front has a central wide arched entrance leading down steps to the sunken covered market. Above, the elevation is articulated by red brick pilasters rising to a plain entablature above the second floor, and an attic (4th) floor above, the centre with a further entablature inscribed NEUADD Y DREF. Round-headed windows flank the market entrance, tall 12-pane corniced sash windows to the piano nobile above, the centre with a triangular pediment, and architraved windows to the 2nd floor. The steeply pitched roof between coped gables carries a central clock tower of 3 stages which provides a notable landmark in the valley. This has a classical clock stage with corner columns, a small attic stage and arched belfry, terminating in a lead dome and finial. To the left of the market hall entrance a foundation stone laid by C R M Talbot, MP, Lord Lieutenant for Glamorganshire on October 31st 1881. At the rear of the side wings, twin segmentally pedimented doors at the head of a flight of 27 steps each side provide access through a flat roofed structure to the main assembly hall. The side elevations, remaining from 1881, have four very tall pedimented windows with shaped aprons each side, the glazing pattern now altered. A wider block at the rear is of 2 storeys, stone with harsh red brick quoins, bands and dentilled cornice, and a red terracotta cross window to the upper floor, designed in with a door with 4-light overlight. This structure extends across the rear of the building.

The interior consists of offices in the front block, and a large assembly hall with a proscenium arch; an entablature on twin columns, and a curved balcony at the rear.

Included as a well designed and imposing civic building which provides a focal point for the Llynfi valley; one of a group of listed buildings at the centre of Maesteg.