Church of Saint Mary the Virgin 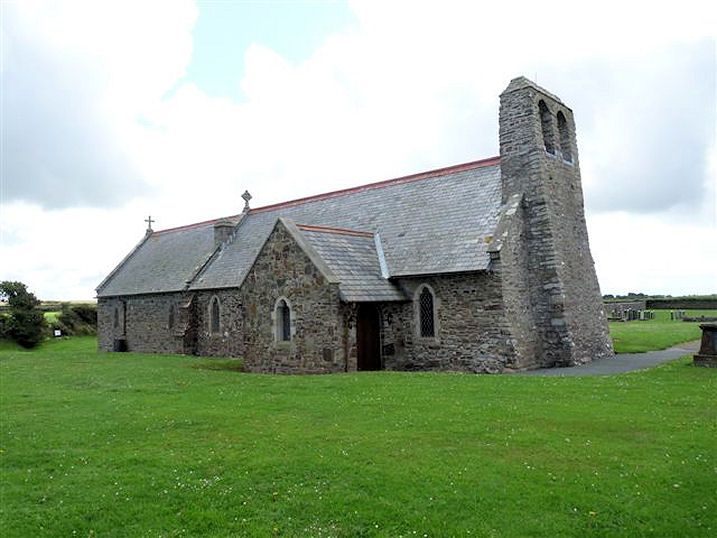 Location: Situated in a remote and imposing location, some 1.5k SW of the centre of Little Haven and some 100m S of the cliffs W of Musselwick.

Anglican parish church, medieval origins, the W wall and bellcote probably late C15 or C16. The was much restored in 1868-9 for £77, with new windows and fittings, and another nave restoration is recorded in 1887. The chancel appears to be mostly rebuilt, 1893 by D.E. Thomas of Haverfordwest for £350.

Sir Stephen Glynne, visiting in 1856, found the church neglected, noted a pointed chancel arch and indications in the chancel side walls of capitals that might have been part of arches to aisles or side chapels. On the chancel N there was a medieval trefoil-headed lancet and a slit window, the nave N door curved headed, the S door crudely pointed. Both walls and roof were whitewashed.

Plastered walls, 1869 nave roof with arch-braced collar trusses. Plain pointed chancel arch with slight step in of jambs. Opening set high to left, part of former rood stair. At W end of nave, blocked window recess, which if genuine must predate the bellcote. Pine pews, screened-off W vestry and lectern of 1869. Pulpit with single-panel sides and simple cusping, and matching stalls, mid to later C20. Chancel has iron and brass standards to sanctuary rails, encaustic tile floor. E window of 1974, Risen Christ, SS Mary and Mary Magdalene, and 4 chancel lancets 1978, all by Frank Roper of Penarth, in thick slab glass sparingly leaded and the clear glass varied with applied lumps of clear glass. At the W end a much recut C13 or C14 square font with arrowhead scalloping below an incised line, round shaft and moulded round base.

A much restored medieval church with late medieval W bellcote of great landscape value from all around St Bride's Bay.