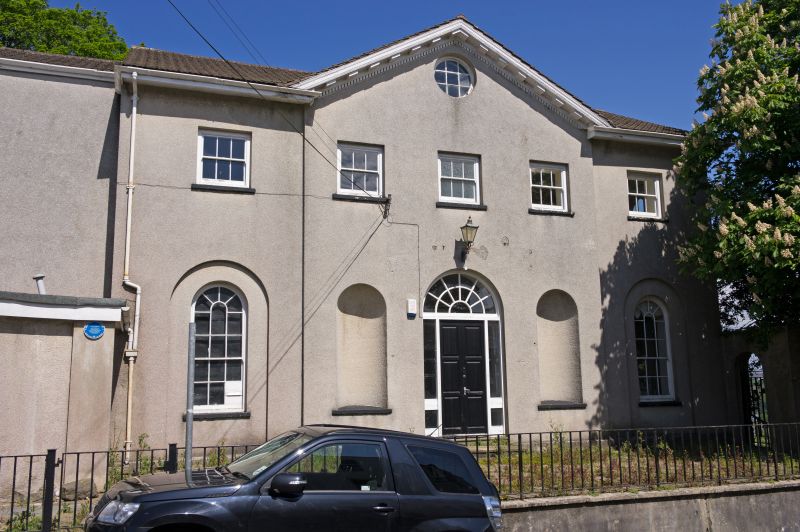 Location: Situated in own grounds on sloping site half way down street, set back in terraced forecourt.

Detached villa designed by John Nash c. 1790 for Richard Foley, advocate, died 1803. A rectangular villa raised on a basement with pediments on three sides. The plan is similar to that of Nash's The Priory at Cardigan with the staircase on the front wall immediately next to the entry, and a principal room in a canted end bay overlooking the garden. The date of 1794 is on the former coach-house, but the house may be slightly earlier, The Priory dates from 1788-9. The Foley family had been at Llawhaden from the C14, Thomas Foley accompanied Anson on his voyage round the world in 1744, and Admiral Sir Thomas Foley (1757-1833), Richard Foley's brother, was distinguished in the Napoleonic wars. Nash probably worked at the family home, Ridgeway, Llawhaden, for their elder brother John. Admiral Nelson visited Foley House in 1802. It was offered for sale in 1821 as a 'capital modern mansion house planned by Nash'. Owned by T.R. Owen in 1884, by H.A.M. Evans in 1901, the George family, wine and spirit merchants in Market Street, from 1914, and sold in 1947 to the County Council for a town museum. Not used as such and progressively damaged thereafter, as an annexe to Taskers School, then as magistrates clerks offices. Poorly refurbished in later C20 with re-roofing in concrete tiles, removal of chimneys, loss of the moulded timber base of the pediment and eaves each side, replacement of the front door, and the recladding in a harsh render, without the broad band that originally ran below the upper window. The garden fronts are less badly affected.

Inventive plan with entrance into a stair hall extending to left, the stair parallel to front wall. Large drawing-room in the E end, and smaller dining-room at rear parallel to stair hall. Service stair in left wing, with small room, possibly once a morning-room, behind.
Panelled reveals inside front door. Rectangular hall with modillion cornice. The ceiling inside the front door has a square ceiling decoration with plain plaster circle and fluting in the spandrels. Cantilevered Bath stone staircase to left rising in two flights with wrought-iron scrolled balustrade. The stair-hall is apse-ended at ground floor with curved 6-panel door at W end. Six-panel doors with bordered sunk panels, one to right into E end drawing-room, one opposite front door, to rear dining-room. Similar borders to panels in reveals and shutters.
In the dining-room a simple plaster cornice with roses in frieze and a veined marble chimneypiece with incised panels and rosettes in upper corners. Mid to later C19 thick ceiling rose. Timber plate shelf on simple brackets around the room. Two doors in the fireplace wall, one in the E wall, and a plain elliptical arched sideboard recess in the W end wall. The drawing room has an ogee-curved E wall, curving the line of the canted bay. Acanthus cornice with undercut long leaves. Two doors in panelled reveals in W wall. Stairs rise up to a landing with similar balustrade. Stair hall cornice has fluted modillions. From the landing a spine passage runs E with an archway to a lobby giving entry to the bedrooms and dressing rooms. Mostly altered, but a small N and larger NW room retain undercut small cornices.
Servants stair is much altered up to first floor but survives to attic. Plain square balusters, closed string and column newels. One long flight and a short flight at right angle. Attic has principal rooms lit by roundel windows.

Graded II* notwithstanding the damaged exterior for its special architectural interest as an important early work of John Nash.