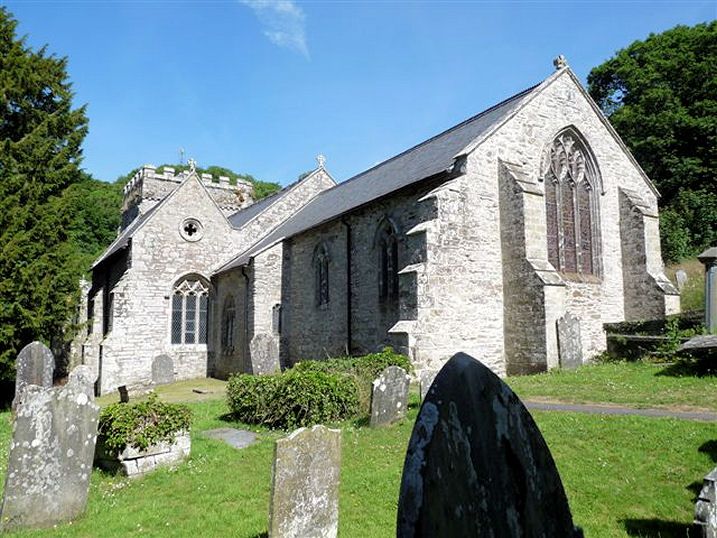 Location: Situated some 350m N of bridge over Afon Nyfer.

W tower, nave with short S aisle and N projecting chapel and slightly offset chancel. Rubble stone with slate roofs, coped gables and cross finials. During the restoration all the window tracery was replaced with intersecting ogee tracery of early Perpendicular type, the S porch was added as were the chancel and S aisle buttresses. Forest of Dean stone was used for dressings in 1864.

Furnishings: two brass candelabra, 1864 stalls and pews, 1918 brass eagle lectern. Stained glass: E window circa 1879, chancel S window 1864 by Cavers and Barraud, N window c1940 by E.L. Armitage, and in S recess glass of c1905. Monuments: three interesting incised plaster panels, one in chancel S recess to W.Warren of Trewern (d 1710), one in chancel N recess to G.Lloyd of Cwmgloyne (d 1731) and one in S aisle to Katherine Warren (d 1720). Numerous C19 plaques to Bowen family: in nave G. Bowen (d 1810) with draped urn, and in chancel E.Warren Jones (d 1829) with draped urn, signed D.Mainwaring. A curious cross-inscribed stone with unusual knotting is reused in S aisle window sill and another inscribed stone on adjoining sill, Latin and Ogham, both found 1906 in wall leading to priest's chamber. S aisle was the Trewern-Henllys chapel and N recess was called Glasdir chapel. The two chancel recesses are supposed to be sepulchral recesses.