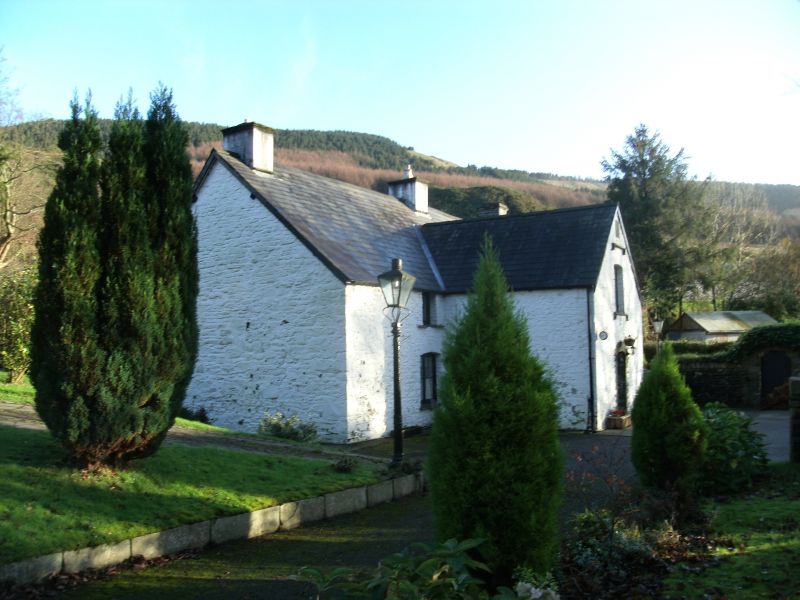 Location: A single house, set within a walled garden on the S facing slope of the valley above the River Rhondda and the later development of the town with access from the street known as Mountain View.

A large 3 unit house of two and a half storeys, facing S, with storeyed porch on the front and lean-to at the rear. The E unit is gabled to the front in the form of a cross-wing. Limewash over random rubble sandstone, with recent slate roof. Four stacks on longitudinal gable are rendered, but with shallow sandstone collars. The S range is dominated by the large gabled porch. A dressed stone sundial in the gable is dated 1652. The upper storey has a later casement window under a segmental arch, and square hood mould. The doorway is also under a segmental arch. Either side of the porch are later casement windows rising to eaves height, with later horned sashes under segmental arches on the ground floor. The E unit has similar windows to its ground and first floors. The sills under the windows on the front range are all additions. The rear elevation has an original lean-to service room built on the E side. The roof of the main range has an inserted gabled dormer with a single pane window. Below this is the lean-to, of random rubble with dressed stone jambs and sills. In the centre of the range is the gabled stairwell, which has two openings under timber lintels. A loft stair light has a single vertical iron bar in a timber frame, while the lower light has four iron bars in a wooden frame with central mullion. To the west of the stairwell the north range has a 2-pane casement window rising to the wallplate. On the ground floor is an inserted casement window under a segmental arch, and a doorway under a segmental arch which has a stable door with tongue and groove planking.

The 3 unit plan form incorporated a central hall with kitchen to the W and parlour to the E, with lean-to service rooms built against the hall and parlour. The opposed entrances to the kitchen define it as a chimney-backing-on-the-entry plan. The porch floor is laid with flagstones.

Other internal features that have been recorded by RCAHM and which are still extant are: that the kitchen has a joist-beamed ceiling with ogee stops, the hall and parlour have beam-and-joist ceilings with run-out stops. Two parallel rollers fixed between the ceiling beams over the hall fireplace formed part of a corn drying rack whereby sacking on which corn had been spread was supported by the rollers. A drying kiln was later inserted on the first floor in a cupboard at the side of the kitchen chimney. The doorway to the stair has ovolo mouldings. The pillar stair has timber treads. Internal doors have decorative iron hinges with fleur-delys. The principals have curved feet set well down into the walls.

Listed as an important example of a large, mid C17 farmhouse pre-dating the industrial and social development of Treherbert and because of its rare surviving, good quality interior timber details.