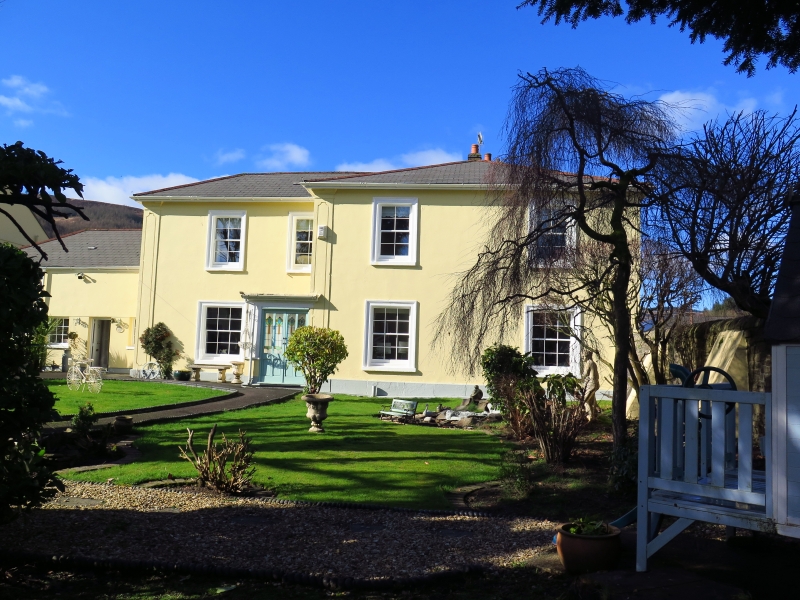 Location: House in walled garden at corner of Bute Street and Brynfedwen Street.

The house was possibly built in connection with the sinking of Bute Merthyr Colliery in 1853; it is not included in the 1851 census, but may appear in 1861. Later the house was inhabited by John Davies, poor law administrator, and Dr. William Evans, first medical practitioner of Treherbert.

2-storey house, rendered and painted, with projecting bay to right which is hipped to front, while central bay is hipped to the left. A lower extension to the left is said to be the oldest part of the house. Slate roof with overhanging, boarded eaves. Two brick chimneys, set transverse to each other, over bay to right. Angle pilasters to front, and facing Bute Street, have channelled panels, and capitals incorporating egg and dart. First floor has replaced 4-pane sash windows, 2 to each bay, in moulded architraves. Ground floor has larger 12-pane sash windows, all replaced, in moulded architraves, and a shallow plinth. Doorway contained in added or altered porch, with plate glass window to left, and late C20 double doors. Inside the porch is an early C20 door, probably originally a front door, which has rectangular overlight with 'BRYNFEDWEN' in painted letters. The range to the left is clearly of a different date. Windows on ground floor only: 2 with 9 fixed lights and projecting sills, and a single circular window to the left.