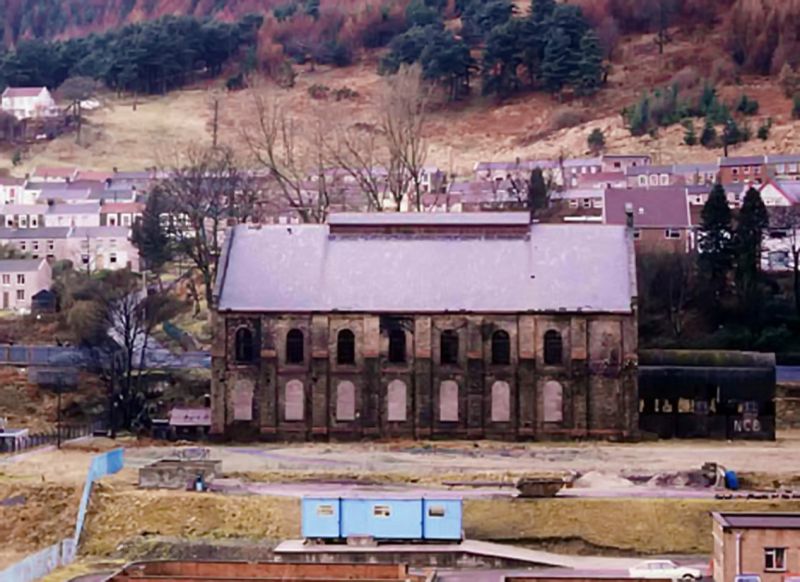 Location: Situated near the valley bottom on the west side of the River Rhondda north of the town of Tonypandy, between the old thoroughfare of Llwynypia Road to W and the new by-pass to E.

First pit sunk here 1863. The area was occupied both by Llwynypia Colliery (also known as Glamorgan Colliery or The Scotch in honour of its founder), and by brickworks, coke-ovens, small scale limekilns, a saw mill and a gravel pit. It was the focus of the early industrial development in this part of the mid-Rhondda under Sir Archibald Hood. This large engine house was built 1905. OS map 1920 shows railway running close to S and W sides.

Built of yellow and red brick in English bond, with stone and concrete dressings under a Welsh slate roof with separately slated long pitched ventilator. 2 storeys and basement, 8 bays in length and 4 in width. Side elevations have 4 stepped eaves courses over round arched first floor windows with brick voussoirs and fixed iron frames for 24 panes though no glass remains; these are separated by shallow pilaster buttresses with offsets of 4 courses of red moulded brick. Ground floor is itself offset with courses of moulded brick, with similar courses to plinth and has round arched openings all now filled in. W side has one blank bay NW and a single storey flat-roofed brick extension at basement level.

Main gable end is S with oculus in gable, date stone 'AD 1905,' apparently stone kneelers and concrete coping with 3 round headed iron framed windows at first floor level and 2 at ground floor, these latter for 40 panes on either side of central doorway which is now blocked and has an arched ring to recessed fanlight; small additional round arched opening to right; deep plinth with 2 courses of moulded brick. N elevation is similar: metal glazing bars but no glass to oculus; 4 round arched windows to first floor, 3 partially or wholly blocked and one with metal glazing bars; at ground floor 4 blocked windows and 2 blocked doors; nearly intact raised gablet of brick and concrete - only vestigial to S ; attached are the remains of a later steel and concrete addition.

Listed as a rare mostly complete surviving engine house on a large scale.