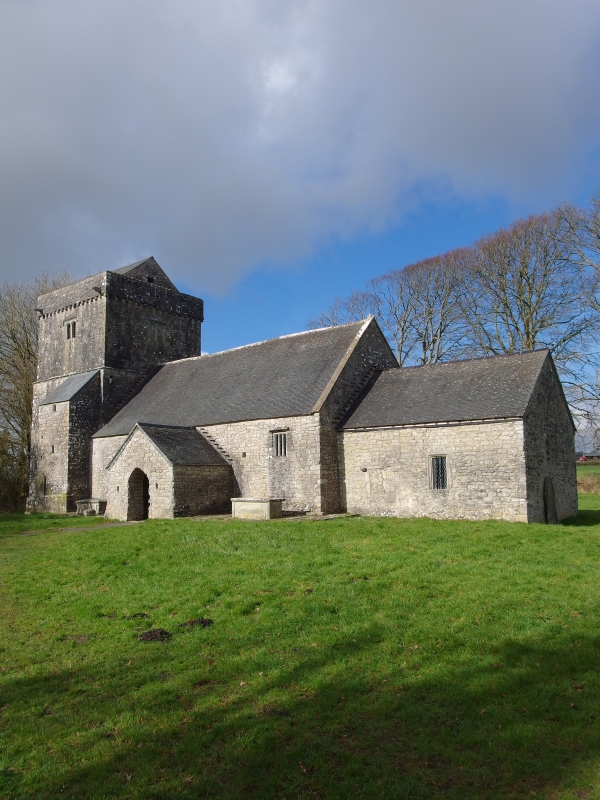 Location: At the very southern point of the community and about 1.5 km south of Penllyn village.

Probably C12 to C13 in origin, with the windows mostly C16/C17 and C20. The breaking through of the east and west walls suggest that this was a simple C12 single cell church enlarged in the C13 with chancel and tower. Both the tower and the porch are largely undatable as they are so featureless and have been very rebuilt. However, porches were a typical C15/C16 improvement and both this and the top of the tower could correspond in date with the major re-roofing of the nave in the C15 when a reredos might also have been put in blocking the east window. There was a major rebuilding and restoration programme in 2000-2003, which included the rebuilding of the south porch and most of the west tower, and the reroofing of the nave and chancel. Originally the parish church, but it was largely abandoned in c1850 when the new church of St. John the Evangelist was built in the village of Penllyn; even though it had only recently been restored and re-opened in 1848 (Lewis). As a result it is extremely simply finished and still very medieval in character. It never had a full Victorian restoration; had only some slight repairs in 1967 by Alban Caroe and still survives in use without electricity or heating.

Built of roughly coursed local limestone rubble with the tower masonry more carefully squared, Welsh slate roofs. Nave, chancel, south porch, west tower.
The south side of the nave has a very plain central gabled porch without windows, pointed arch doorway with early C20 plank door. This is flanked on the left by a probably C16 3-light window with dripmould and on the right by an oak 3-light window in the C17 manner which is a Caroe insertion. The chancel, which is extremely simple in finish and has a lower roofline than the nave, has a blocked window and a plain rectangular one with hollow chamfer to frame. No window on the east gable though internal evidence shows there was once a 3-light one. The north wall of the chancel has another plain window and a 2-light C17 one. The nave north wall has a projection for the rood stair and beside it a plain mid C20 stone 3-light window, again a Caroe insertion. The wall is otherwise blind, but shows signs of a blocked north door.
Massive square unbuttressed 2-stage west tower, with a projecting stair turret on the south side rising only to the band between the stages. Blocked pointed arch doorway on west face within larger relieving arch. Rectangular window over with plain recesses on either side. Beneath these are three plaques recording repairs, one dated 1629. Three 2-light bell-chamber openings with hollow chamfers, blocked on the east face, the one on the west face is an earlier medieval type of opening. Plain parapet on corbels, pitched roof behind, corner water-spouts on the north and south faces.

Included and highly graded as a medieval church in a largely unaltered state.