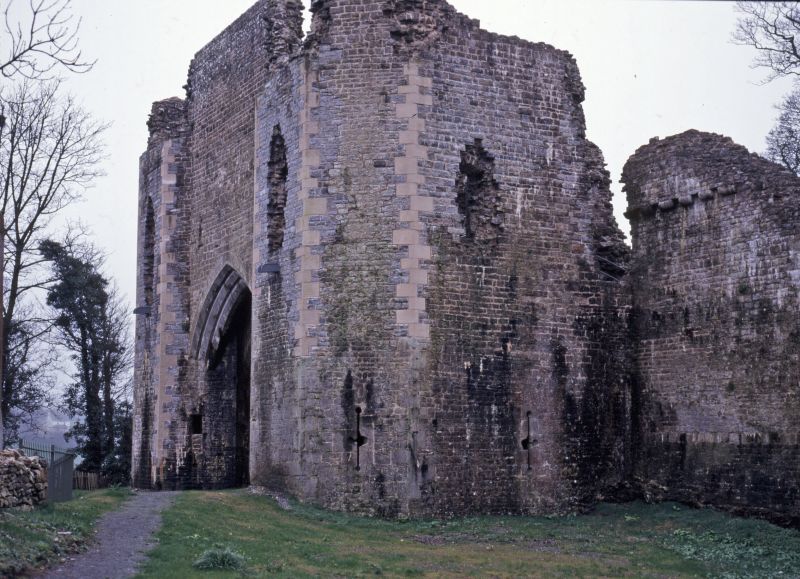 Location: About 450m NE of Llanblethian church on spur of land above loop in River Thaw.

Although known as St Quintin's Castle, after the first Lords of Llanblethian, the St Quintin family were dispossessed in 1233 by Richard Siward, upon whose outlawry in 1245, the castle passed to Richard de Clare, Lord of Glamorgan. Only the ruinous keep of C12 can be associated with the St Quintin family. The gatehouse belongs with the newly fortified enclosure probably begun circa 1312 by Gilbert III de Clare, killed at Bannockburn in 1314. There are stylistic links with Caerphilly castle. From C15 onwards castle was used as a prison.

Gatehouse (set forward from curtain wall) in local grey lias stone with dressings of buff Sutton stone. Central Gothic archway (provision for portcullis) flanked by towers with splayed corners. Cruciform arrow loops at ground floor level, most of dressed stone from windows and upper loops lost. Smaller arch in rear face of gatehouse. The remains of the curtain wall enclose an irregular quadrilateral about 52m by 50m; foundations of towers at angles N and S of gatehouse, and turret to NW. In centre of enclosure, remains of C12 keep.

Listed for as substantial remains of medieval castle.