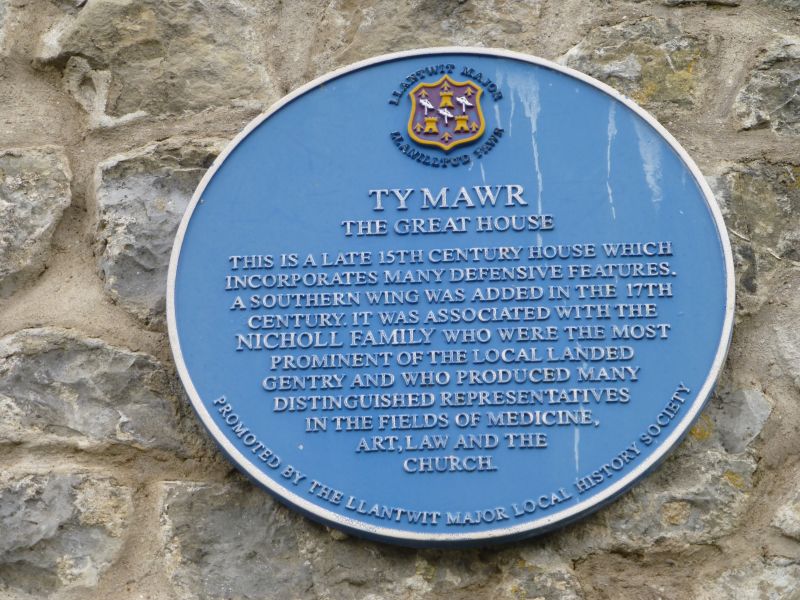 Location: About 500m north of the Church of St. Illtud at the northern entrance to the town.

Late C16 house, possibly incorporating earlier structure, the kitchen wing was extended by a further room at some period; repaired in c1915, possibly by G E Halliday: restoration in c1950 after being unoccupied and then becoming derelict post WWI, a number of features, particularly windows, were replaced at this time. 'Great House has many finely detailed dressed stone features cut from both Sutton stone and sandstone. It was latterly the home of the Nicholl family although it is not certain whether they were the builders of the house; the house was somewhat remodelled in 1915 and again in the late 1940s at which time it was derelict.' (RCAHMW)

Local limestone rubble walls, only roughly squared and coursed with quoins and relieving arches, so possibly once plastered. Welsh slate roofs; roll moulded coping to gables; stone stacks with plain weathering to each gable. Three storey rectangular block in centre of house with two conjoined gables with stacks towards south-east and north-west and one gable with stack to south-west, south-east and north-east elevations with two-storey wings built against them and long outbuilding against north-west elevation. Two, 3 and 4-light mullioned windows with dripstones, many repaired and replaced; dripmoulds and relieving arches over; leaded glazing, all post 1952, at which time they were glazed with diamond lattices.
Left hand gable of south-east elevation with 4-light window to ground and first floors and 3-light window to attic. Right hand or north-east gable with lower parlour wing of two storeys built against it; four-centred arched doorway with dripstone at north-west end, C20 door with three vertical panels, and a 2 and a 3-light window to south of it; three windows to first floor, a 3-light to the left under the eaves then a 3-light and a 2-light with dripmoulds; external stone chimney breast and stack to south-east gable, 2-light window behind on upper floor.
South-west elevation with 3-light window to both first and attic floors.
South-west or right hand gable of north-west elevation with 3-light ground floor window and slit window to first and attic storeys. Left hand or north-east gable of this elevation with end of long outbuilding wing against it. Outbuilding with south-west stone rubble wall and slate roof; south-west wall with doorway with stone voussoirs near centre, with wooden boarded door but also partly blocked; ventilator slit to right hand above; loft opening to left hand. Lean-to at north-west end.
The courtyard elevation shows some alterations to the stable wing. This has rows of pigeon holes and a concrete block lean-to. The kitchen wing also has some alterations and a rooflight. Late C20 gabled entrance porch in angle.

Interior not available at resurvey. It is very completely illustrated and described in RCAHMW. 'A house of cruciform plan based on the chimney-backing-on-the-entry type of plan. However, the large hall and chamber over it, at the centre of the plan, both have two fireplaces in opposing walls. There is a kitchen in a rear wing which has been extended to the W. by the addition of a vaulted service unit. The N. wing that appears to have housed a stable unit has a line of dove-holes along the W. wall at first floor level. The S. wing is largely rebuilt and the central stair is a later insertion.' (RCAMHW) There are particularly fine masonry details with many of the elaborate thistle stops also found at Llanmaes House (q.v. Llanmaes Community).

Included and highly graded as a late C16 house which, despite changes, remains an architectural design, and retains features, of special interest.