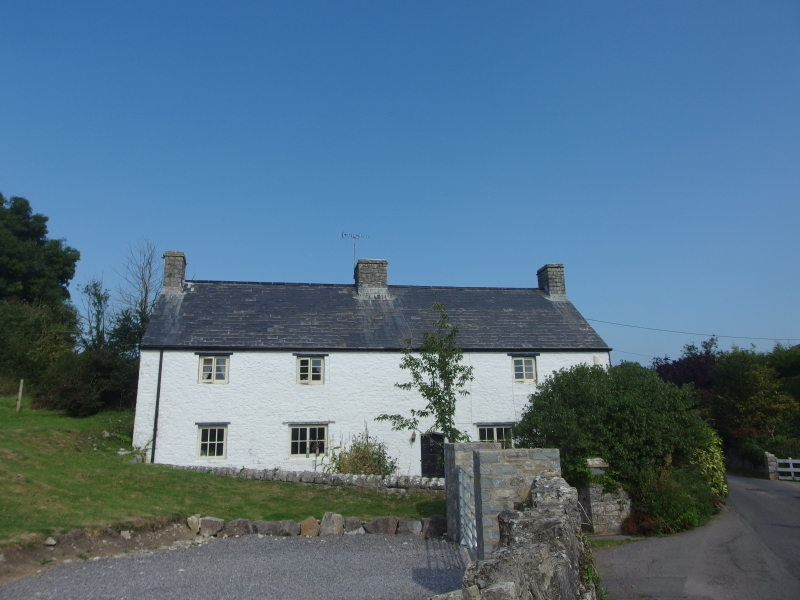 C17 cottage which has been little changed externally. It is, however of two builds, a c1600 end entry house with hall and unheated inner room and a cross-passage and outer room added at some time later in the C17. Small rear wing added probably in the C19. 'Both houses (i.e. Downscross Farmhouse), which externally appear to be of a classic three-unit hearth-passage plan, are, when viewed internally, clearly alterations and enlargements of early, smaller houses.' (RCAHMW)

Two storey house with painted stone walls and Welsh slate gable roof with three stacks, the largest stack to middle, immediately to the south-west of the cross-passage. The roughly coursed local limestone rubble walling shows in the unpainted south-east gable.
Front elevation with three window bays plus cross-passage doorway; windows with timber lintels. The original build is to the left of the doorway. From the south-west end; firstly, a three panes wide window below and a 2-light window with small panes above; secondly, a 2-light window with small panes on ground floor with a smaller 2-light window above; thirdly, beyond centre stack, the arched stone doorway with chamfer and stops to the cross-passage, modern boarded door. Fourthly, 2-light wood ground floor window; fifthly, small 2-light window with small panes on first floor. All the windows are late C20 replacements. Steeply pitched roof with three rebuilt stacks. Single storey lean-to the north-east end with window and door.
The rear elevation has a small wing. Similar 2-light timber windows on the first floor. Four late C20 attic roof-lights.
Front garden enclosed by stone rubble walls with gate piers and C19 iron gates.

Included as an early C17 house which, despite changes, retains both character and features of special interest.