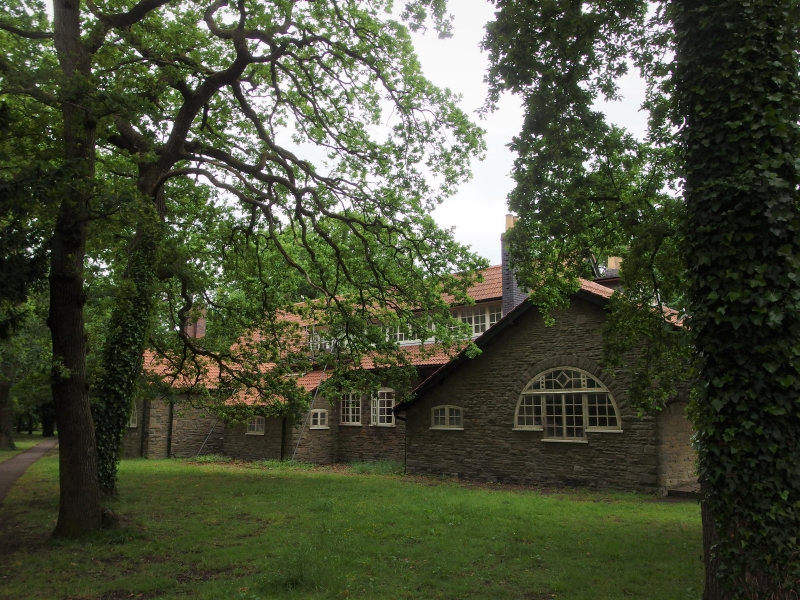 Location: Situated to the NE side of the open churchyard of All Saints, which forms Victoria Square on the NW side of Victoria Road.

Built in 1906 by John Coates Carter, the well known architect of Penarth who from 1885 - 1904 was in partnership with John Pollard Seddon; foundation stone laid June 9th 1906.

Stylistically this single storey hall has its origins in the Arts and Crafts movement but here has an originality of detail that perhaps shows direct influence of the work of the North American architect H H Richardson. In Britain it is comparable to the Church of Christ Scientist, Manchester, 1903, by Edgar Wood in its use of a broad round arched entry and flanking rounded tower.

Snecked rubble masonry with steep Roman-tile roof, overhanging eaves and blue brick chimney stacks; small-pane glazing throughout. The main (NE) front has open-fronted Italianate loggia, central entrance and round stair tower to right; behind is a foyer with flanking service rooms and the whole is contained under one cross roof that joins the main roof just below the apex with gallery window. The front of the roof over the loggia is carried on simple raking timber brackets springing from stone corbels. The tower has conical plain-tiled roof with swept overhanging eaves and tall lead finial; freestone surrounds to the windows with diamond leaded glazing. Deep round arched entrance set within broad and splayed rere-arch also spanning a square headed doorway to the tower; boarded doors with small-pane overlight. For the H H Richardson comparison see for example, Crane Library, Quincy, Mass., USA. Ramped abutment to left end of loggia including round arched gateway. The SE side begins with the asymmetrical gable end of the entrance and foyer section; this has lunette type tripartite window with distinctive, mannered, dropped sill to the central light; diamond pane to top. Both sides have flat-roofed clerestories to the main roof which sweeps down low in dog-legged manner; camber headed casement windows to side walls, several grouped together on NW side behind tower. Boarded double doors with overlights beside lean-tos; small cross ranges at SW end with semicircular lunette windows to gable ends. The dog-leg profile of the roof is especially strong on the broad SW end which has large circular window with grid pattern glazing bars and voussoirs; cellar doors stepped down to centre and camber headed doorways to either end.

Listed as one of the most important works by this local architect.