A Grade II* Listed Building in Barry, Vale of Glamorgan 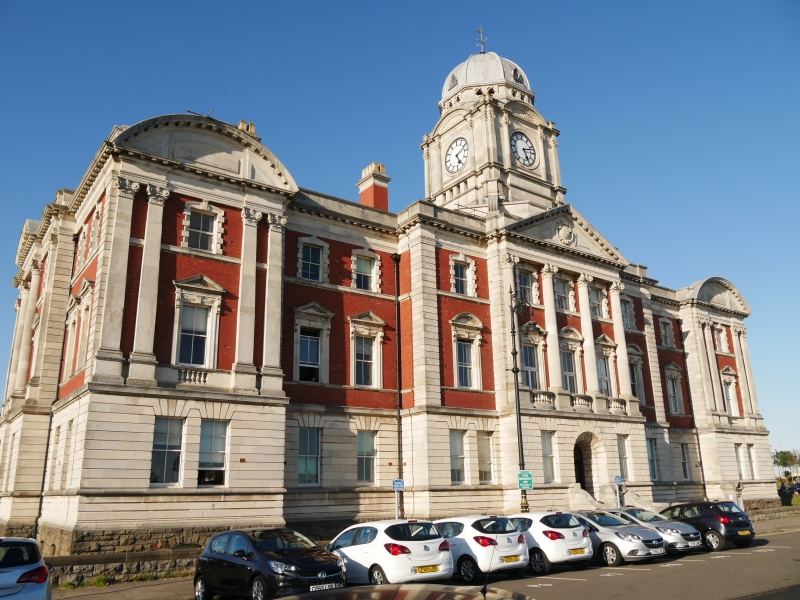 Location: Prominently sited, overlooking Docks to S, below the town on a flat site near Castleisland Point; railway immediately to rear.

1898; architect Arthur E Bell, architect, of Cardiff and Barry, whose father, James Bell, was resident engineer of Barry Railway Co, and supervised construction. Built as general offices of Barry Railway Company. Damaged by fire 1984, after which clock-tower had to be rebuilt.

Neo-Baroque/Wrenaissance style with symmetrical elevations and central clock tower; 3 storeys over basement. Portland stone facings to ground floor and similar dressings above to brick elevations; hipped slate roof with brick chimney stacks. The main front is 11 bays, emphasised to ends and centre; the middle 5 bays are advanced and the central 3 bays are further projected with dated triangular pediment; the end bays are advanced with segmental pediments. The pedimented sections have (on upper floors) giant order composite columns and pilasters, all with entasis (pilasters to ends, columns to centre); overall dentil cornice. The tall stone clocktower has octagonal base and with deep volute brackets, square clock stage with columns and scalloped pediments, and octagonal cupola with domed roof. Sill bands to 4-pane sash windows; cambered and keyblocked architraves to 2nd floor and bracket pedimented architraves to 1st floor - alternate segmental pediments to centre. The 3 tall central windows open onto segmental curved balconies with bulbous stone balusters; blind balustraded aprons to end windows. Channelled ground floor rusticated around round-arched entrance with deep concave jambs; double doors with traceried fanlight. Steps rise over basement yard and have swept parapets and panelled square piers with semi-circular caps. Snecked rubble basement. The side elevations have similar detail and are 2 3 2 bays, advanced to middle with segmental pediments inscribed 'BR'. The central bay on both sides is flanked by composite columns and has balustraded balcony. The E side has chimney-like stone finial over the pediment; also on this side there is a double-doored entrance to L of centre with square piers to parapet walls; war memorial tablet beside the doors. T-shaped at rear where there is little detail; the central toilet projection has pyramidal roof with louvred ventilator.

Octagonal inner porch with panelled sides, half-glazed to L and R; similar fanlight to inner doors which have fine sinuous Art Nouveau brass handles. Long central hall with stone double return staircase to far end; the flights above the half-landing being cantilevered. Ironwork balustrade with circular foliage and fruit trails, latticed band to base, s-shaped tread ends and panelled metal newels, octagonal to base; wooden handrail. Bronze bust on half landing to Edward Davies, son of David Davies and managing director of BD & R Co, lugged architraves to hall; circular windows near the foot of the stairs. To the L and R, rooms are laid out around square-planned corridors. Former manager's office is wainscotted; board room said to be similar. Interior damaged by fire in 1984.

Graded II* as one of the most monumental commercial buildings in South Wales. Group value.