Pedestal and Statue of David Davies

A Grade II* Listed Building in Barry, Vale of Glamorgan 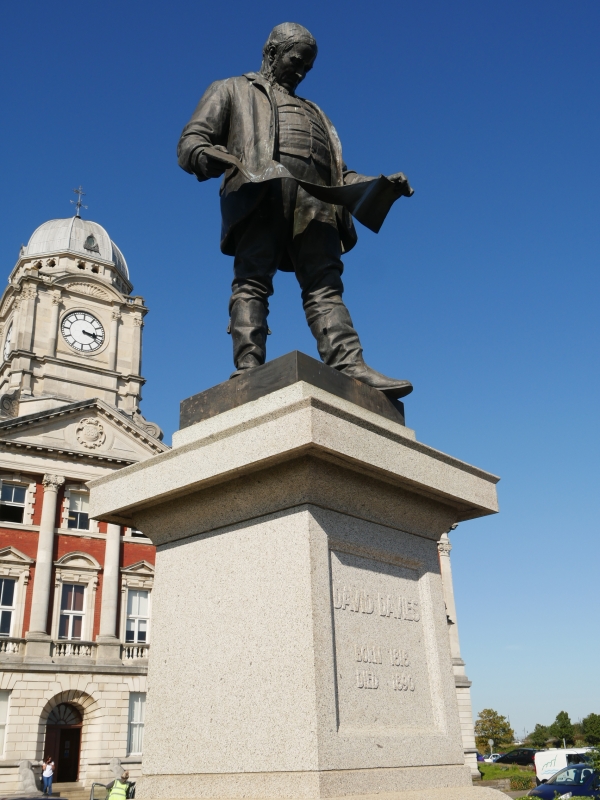 Location: On the seaward side of the road in front of the main elevation of the Barry Dock Board Offices. Faces S overlooking the docks.

David Davies (1818-1890) was a self-made engineer, industrialist and entrepreneur. He was contractor of some of the earliest railway lines in Wales. He then went into coal-production as chairman of the Ocean Coal Company and it was this venture and the inability of the Bute Docks at Cardiff to handle the quantities of coal, that led to plans for a new dock at Barry as well as the necessary railway connection. In 1881, Davies was amongst a group of businessmen who promoted the Barry Dock and Railways Bill which was passed in 1884. The docks were responsible for the growth of Barry as an urban centre, and in terms of tonnage of exports amongst the busiest ports in the world.

Designed by Alfred Gilbert, sculptor, of London, one of most important sculptors of his day (eg Eros, Piccadilly Circus, Duke of Clarence Tomb, Windsor); bronze figure founded by George Broad and Sons, London. Standing figure of David Davies with left foot forward and studying plans of his dock and railway developments. Square granite pedestal stepped out to high base and broad cornice. Inscribed panels commemorating Davies as "Chief Promoter of the Barry Dock and Railway Company". Square platform with cap-like ornament to corners. Statue circa 2.7m high; pedestal circa 2.4m high.

A contemporary copy of this statue exists at Llandinam, Davies' birthplace.

Graded II* as the work of one of Britain's most important sculptors and for historic interest as monument to David Davies. Group value