A Grade II* Listed Building in Sully, Vale of Glamorgan 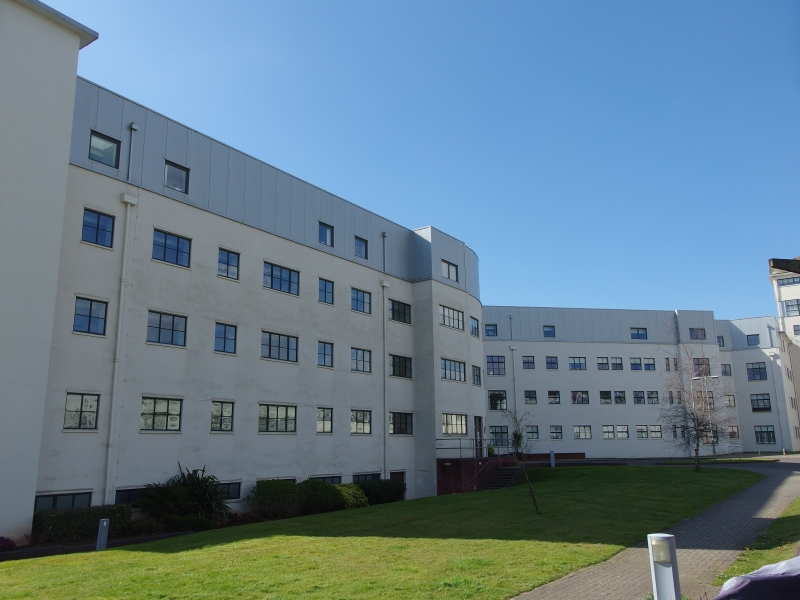 Location: Reached along a byroad one-and-a-half kms SW from B4267 near W outskirts of Sully. The hospital is sited in extensive, wooded grounds at Hayes Point overlooking the Bristol Channel.

Constructed 1931-8; opened by the Duke of Kent on 6th November 1936, for the treatment of tuberculosis patients. Sully Hospital with 300 beds was the last institute established for the treatment and abolition of tuberculosis by the King Edward VII National Memorial Association whose president was Lord Davies of Llandinam. Taken over by the Welsh Hospital Board in 1948, Sully subsequently developed as a general hospital; the hospital had already played a significant part in treating wartime casualties including evacuees from Dunkirk. Designed by W A Pite, Son and Fairweather, an architectural practice of London which devised the S ward block with traps to provide shelter and 'sun heated air'. Modern Movement in style; design revised after competition to eliminate Neo-Georgianisms.

The following description of the plan comes from the Vale of Glamorgan Buildings Preservation Trust report of 2002. 'A single building with internal corridors contains all the functions of the hospital. It is divided into four blocks. Facing the main entrance drive is the Nurses' and Maids' home on four floors containing 132 bedrooms. This block houses the main entrance that marks the beginning of a spinal corridor leading to the Administration Block with kitchens on the ground floor and medical staff quarters on the first floor. Next is the Special Block with social suites on the ground floor, the X-Ray department on the first floor and the operating theatre on the second. Finally the Ward Block stretches east and west on three floors so that every ward faces out to sea. It was planned for 300 beds in six 50-bed units - three for men and three for women. Each ward is divided into single rooms and rooms with 4 and 8 beds. The most interesting rooms are those with fully opening windows on two sides so that balconies are unnecessary. Other rooms were given outside balconies but these have since been enclosed. The ward block is not straight on plan. Instead it is cranked to give projection and recession to provide the shelter required by the brief. The Power Station, Boiler House, Incinerator and Garage lie to the east of the spine and the Medical Superintendent's House and Lodge are separate buildings in the landscaped grounds. The woodland belts that were already planted on the site shelter the whole hospital.....The staircases were (revised design of 1932) in circular towers and the principal stairs were in elegantly curved reinforced concrete with stained glass windows. The interiors of the hospital were easy to clean with coved skirtings and flush surfaces. Electrical and mechanical equipment - specified by Plevin and Jenkins of Cardiff - was comprehenisve with separate lifts for different types of traffic. Contemporary photos show that rooms and corridors were spacious and generously lit. The architects designed much of the furniture. Some was made by the Brynmawr furniture factory that was set up by the university settlement in the town..'

Stepped wings similarly treated, plus linked concrete balconies with metal handrails to longer inner bays, French windows to southern ends; original glazing to ground floor left and 1st floor right only. Outer wings step back as before to join long 9-window ranges with linked concrete balconies with French windows plus 1-window and pavilions with metal handrails to roof and terraces.

Large double panelled doors to main (ambulance) entrance under canopy at base of main staircase tower with diagonally-rising glazing. One and 2 storey ranges in matching style along spinal corridor linking ward block through quadrangular service block to north entrance block.

Graded II* as one of the few exceptional inter-War public buildings in Wales and the finest designed in Modern Movement style with international influences (eg the public works of such Dutch architects as JJP Oud and Duiker and Bijoret's Zonnestraal Sanatorium of 1926-8). One of the few surviving products of the Welsh National Memorial Association, a precursor of the NHS, and in the vanguard of contemporary medical developments in the treatment of tuberculosis.