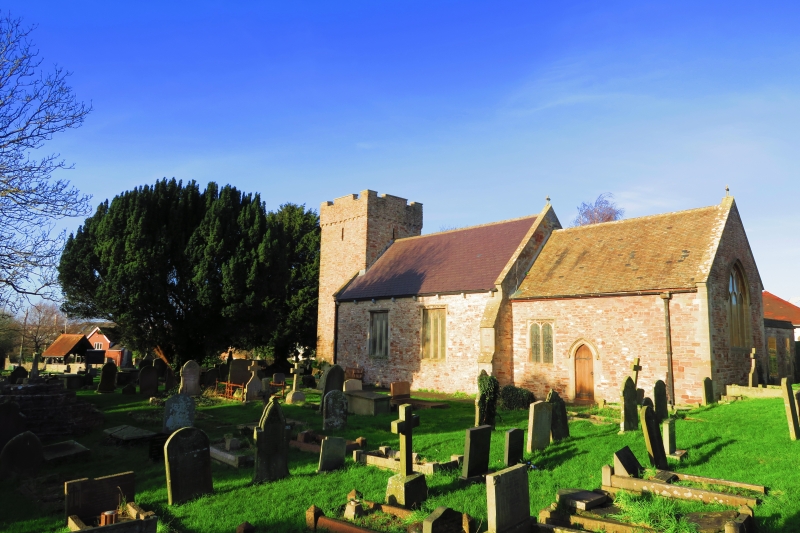 Location: At the W end of the C20 urban development of Sully, the core of the former village, in a large roughly triangular churchyard on a corner site with Cog Road.

Reputedly founded by Reginald de Sully 1093 and a Norman chancel arch is reported to have existed until 1830. List of vicars from 1242. Chancel originally C13 and tower probably C14. A remodelling is recorded in 1701. Revd W Conybeare, a South Wales coalfield pioneer, who later became Dean of Llandaff, instituted a major restoration in first half of C19 which involved building a new chancel arch and lengthening the chancel. The S aisle wall was demolished and the existing windows re-set in its replacement, the present S nave wall. Conybeare promoted the change of services in Welsh to English; he was also a friend of the author Charles Kingsley. Further restoration from 1848 under Revd George Wood with box pews removed 1874; he became chancellor of Llandaff cathedral. Restoration 1895 by Seddon and Carter included new roofs. Font of 1851, designed and made by J Castle of Oxford, was in the Great Exhibition at Crystal Palace and was given to the church in memory of John Evans manager of Dowlais Ironworks who lived at Sully House. E window of 1874, stained glass by A Wilkinson 1949, N aisle windows 1927. SW nave window has stained glass of 1933 designed by Isaac John Williams Keeper of Art at the National Museum of Wales. Bells from 1558, though the earliest now remaining is of 1758; restored 1880. Churchyard cross restored 1927 to commemorate 7 sailors who drowned off the nearby coast; stone used from N wall where windows were inserted.

Entrance is through S door of tower. Interior is mainly rendered with exposed dressings, exposed rubble masonry on W wall; roofs are boarded, the nave with 3 deep arch-braced trusses with king posts and moulded tie beams, deep wallplate, all in dark-stained wood. Pointed chancel arch with no capitals. Two fonts: one of mid-C19 date is very elaborate of Caen stone with carved angels in Decorated foliage; the other is small, of wood and in an unusual capstan-shape on a stone plinth, probably C18. Chancel has C13 trefoil-headed piscina with 2 roll-mouldings.

Listed as a medieval church with an interesting history of adaptations and containing 2 notable fonts.