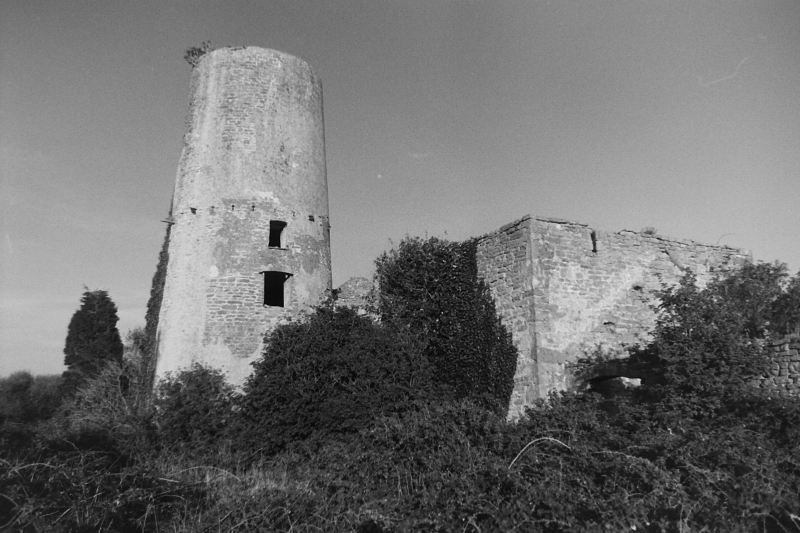 Location: Between the road and the industrial estate, opposite the farmhouse, to the north of Sully Hospital; in a fenced enclosure.

Hayes Farm was a model farm built 1813 at the end of the Napoleonic Wars by Evan Thomas of Llwynmadog Estate, Brecknockshire (1778-1832). Thomas bought the manor of Sully in 1812 and modernised the agriculture of the area according to best practice of the period. He brought together 7 farms into 2 model complexes managed by bailiffs: Cog Farm and Hayes Farm. The farmers were re-housed, field sizes increased, and facilities improved. Unusually for farms of the day, Hayes and possibly Cog had their own windmills to grind corn. Edward Harrie and William Stoddard are recorded as millers from 1821-28. The mill was of the revolving cap type and was later enhanced by horse walk and gearing, an oil engine installed c1902. The surrounding farm land was sold for industrial development in 1947 and the farm closed in 1950s.

A stone tower mill with attached granary and barn. The windmill tower is of coursed rubble limestone, with patches of render; the cap is missing. There are iron joists of a former gantry at 2 thirds height, with a blocked access on the north side. Two windows, one above the other, are below this on the west side, and one and a doorway on the east. On the south, a door opens at first floor level into the granary.

The granary and barn form a long rectangular range, now roofless, of rubble stone with red brick dressings, mostly cambered-arched openings. Tall round -headed threshing arches opposite one another towards the centre. The building formerly had 2 floors, with a granary to the west and barn to the east. Lower level extensions were at each end, with cartsheds at right angles. Ruins of other buildings stand to the south and west, single storey range to W. The farmhouse is on the opposite side of Hayes Road.

Inside the tower the hurst frame retains 2 pairs of stones and stone nuts. The drive post is complete with wallower and spur wheel. Another drive passes through the wall.

Listed as the only windmill with surviving machinery in South Wales and for the historical interest of the complex for agricultural modernisation.