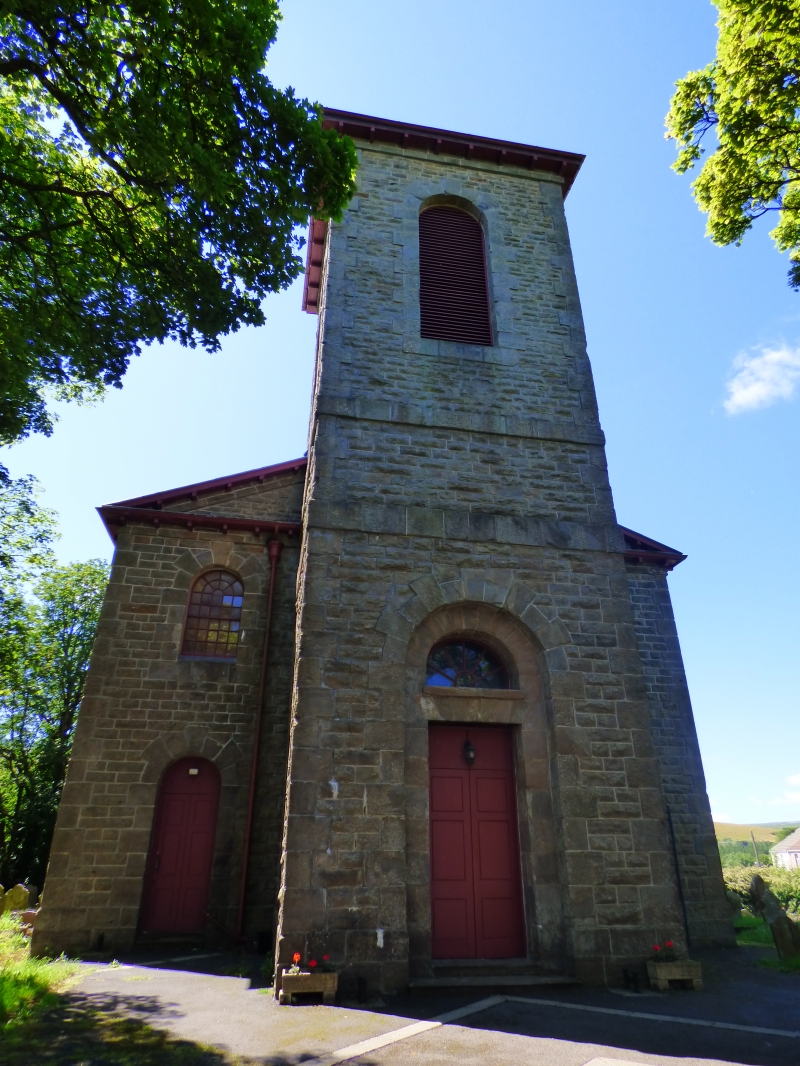 Location: On the main thoroughfare a little N of the town centre, surrounded by an extensive walled churchyard sloping to S and W.

Built 1839-43 by Philip Hardwick, architect of London, for Andrew Buchan (1787-1870), manager of the Rhymney Brewery 1838-1858 which served the Rhymney Iron Company. A carpenter by trade, he originally came to the area to work on diverting the river to prevent it flooding the ironworks. He also became manager of the large and important Company Shop, which operated the Truck system, in spite of it being outlawed: workers had to buy their goods from the Company shop. Buchan is buried in the church vaults and is commemorated by a plaque in the nave. The plan of Rhymney Iron Company property of 1838 shows the church sited in the midst of scattered terrraces of industrial housing, between tramways to E and W, with Rhymney River to W, and a limestone tramroad to N.

Neo-classical church with similarities of design and plan to non-conformist chapels, the major difference being the prominent bell-tower at the entrance end. Unusual plan in that tower is at E and sanctuary at W - reversed orientation. Of coursed bull-nosed rubble with raised tooled freestone dressings; slate roofs and wide bracketed eaves, which are extended across gable ends to give pediment treatment, small stack at W end. 2-stage square tower with long louvred belfry openings, 2 platbands; tall stepped-arched main entrance with separated fanlight over very tall 6-panel door with fixed upper panels; two shallow steps with large iron boot scrapers; recessed blind arches to the sides of the tower. On either side of the gable end, which is stepped back from the projecting tower, are small pane round-headed iron windows over further tall doorways. Side elevations of 4 bays have very large small-pane iron windows and sillband; deep plinth. At the far (W) end the sanctuary projects with lower gable end with pediment platband; the window was formerly as on the sides but now shortened at the base and with coloured glass; single storey gabled vestry and chapel wings with square headed windows project to either side.

4 bay interior with E (rear) bay partitioned off below organ loft. Tapered painted iron Doric columns with simple cushion capitals and no bases. Raked gallery has front with pilasters over each pier, section removed at NW and rear curtained off. Coved ceiling cornice and decorative central rose. Segmental arched recess to chancel with stained glass window to Sybella Buchan (d 1856); furnishings re-ordered, pulpit replaced, 6-panelled door to left retained. Original pews with doors are grained; gallery benches are also grained. A number of wall monuments including 4 to the Buchan family by Reeves of Bath and Wood of Bristol, another to Henry Valentine Trump JP (d 1895), manager of the Rhymney Ironworks, of Rhymney House. Organ by Joseph Walker of London, 1860. Vestibule at E (rear) end has staircase to gallery with stick balusters, slender newel post and swept handrail; this area was remodelled in C20 together with rear bay of nave but retains deep 6-panelled doors with architraves, all grained. Large painted board records erection of church: '...It contains 847 sittings... 575 of which number are declared to be free and unappropriated for ever.... Signed L Edwards Minister, A Buchan Churchwarden. July 14 1843 signed SE Lambert'.

Graded II* as one of the most interesting Neoclassical buildings in South Wales. Group value with surrounding wall and railings.