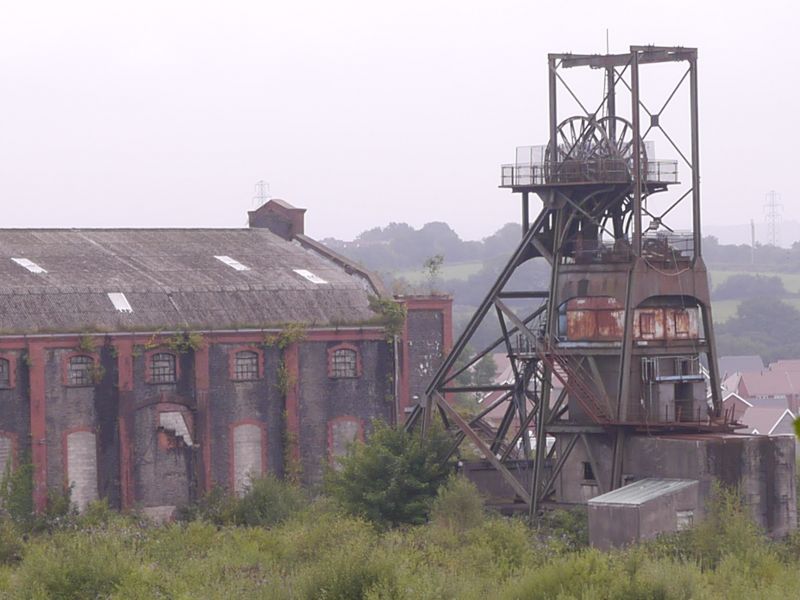 Location: Situated between Ystrad Mynach and Gelligaer, on the east side of Penalltau Road. The eastern of the two headframes, at the east of the complex.

Penallta Collier was built between 1905 and 1909, at the height of the South Wales coal trade. It was established by the Powell Dyffryn Steam Coal Company, the region’s largest mining company, on the most modern principles as the ‘super-pit’ of its day. The surface buildings were laid out in a matching architectural style in a spacious, artificially levelled area, on a rectilinear plan giving the ideal spatial arrangements of activities. The design of the enormous engine hall in particular was an important innovation copied at many later collieries. The colliery became one of the largest in Wales with 3,200 miners and a high output of top-quality steam coal. By 1935, Penallta held the European record for coal produced in a single week. The rolled steel construction of the headframe was still rare at this date.

The No. 2 Headframe (the easternmost) is one of the two original headframes for the colliery. Of rolled steel construction, it consists of a four-legged tower with two shear legs to the winder side and a series of cross braces. There are two sheaves, with a railed access platform around them supported by curving braces. Later insertion of metal and concrete structure within and beside the frame contains rooms.

Listed II* for its value as a landscape feature and its rarity as one of very few headframes left in South Wales. Group value with other items within this exceptionally fine colliery complex.