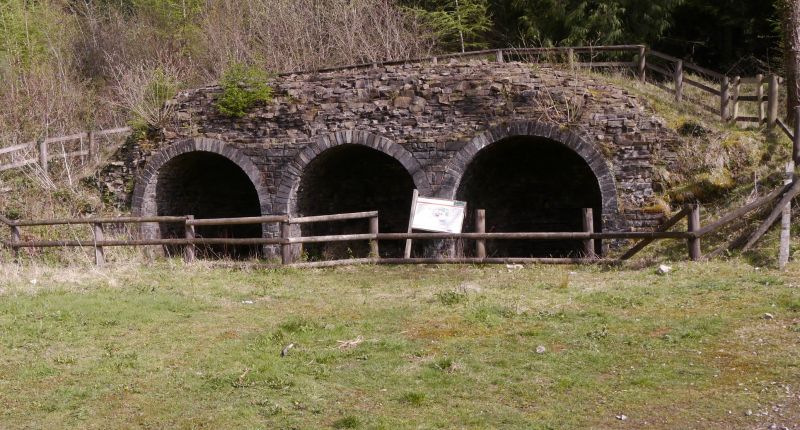 Location: Located in an overgrown area immediately adjacent to south side of Van Road, east of a track to Tyn-y-parc.

Mid C19 lime kilns first shown on 1883 Ordnance Survey, possibly serving a small quarry on the N side. Lime kilns were widely used in Britain from the C17 to the C20 to burn limestone for use as a fertiliser and in mortar. Many small banks of kilns were built in the late eighteenth and nineteenth centuries near roads or other transport routes, and usually close to quarries. This group is of typical scale and construction for a mid nineteenth-century kiln bank, while its large kiln chamber with 2 draw holes is unusual but is found elsewhere in the district (c.f. Pen-y-bryn, Eglwysilian).

A kiln bank sited on sloping ground in order to utilise the natural gradient for charging at the top and drawing at the bottom. The walls were original faced with hammer-dressed stone, most of which is now robbed out, leaving core stonework exposed. On the downhill side are 3 semi-circular draw arches. The arches are infilled with spoil, except on the R side where the cast iron lintel above the draw hole remains visible.

At the charging level is a single circular filling hole and a second much wider filling hole with straight sides and round ends, probably made by combining 2 former circular kilns. This larger kiln is therefore served by 2 draw holes.

Included as a good example of a type of small industrial structure once common in the area.