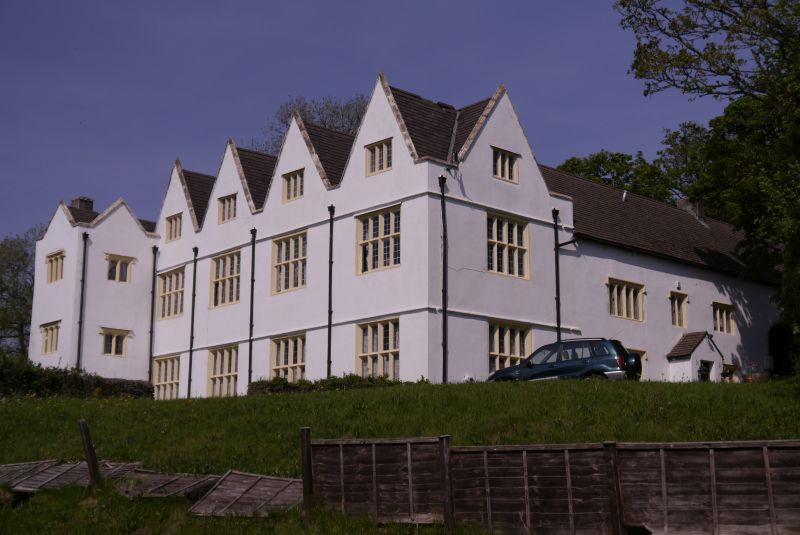 A house on the site of the Van is first mentioned in 1529 when it was purchased by Edward Lewis, a sheriff of Glamorgan, and was mentioned by John Leland a decade later. This probably consisted of a ground-floor hall with storeyed porch, which survive partially as the present porch and the N and E walls of the main range. A 2-storey kitchen wing was added behind in the mid C16. In 1583 Edward Lewis'
son Thomas obtained the lease of Caerphilly Castle and used dressed stone from there to rebuild Van House with a new stair block on the E (rear) side and a gatehouse and walled court to the W overlooking the valley and Caerphilly Castle. The house had a first-floor and an unheated ground-floor hall. In 1616 Sir Edward Lewis transferred his seat to St Fagans Castle and after 1628, when the main line of the family was no longer settled in Glamorgan, Van House became relatively insignificant. In the early C17 the kitchen wing was extended by a further unit and became a separate farmhouse. The remainder of the house may have been largely dismantled after 1736 when the Lewis estates were inherited by the Earl of Plymouth. The stair block also became part of the farmhouse and its stair was removed probably C19. In the late C18 or early C19 the farmhouse was extended again by the addition of a cart shed. Van House remained part of the Plymouth Estate to 1991, by which time the lower storey windows had been robbed from the main range and nothing more than the bases had survived of its attic windows. The house has since been thoroughly restored.

A large Tudor mansion consisting of a 2-storey main house with attic facing courtyard to W and a storeyed porch at the L end. Behind is a former stair block to centre and a lower 2-storey E wing facing the road on the S side. Of rubble stone cement rendered and painted white, with restored synthetic slate roofs.

The main house has a 4-bay front with 4-light mullioned and transomed windows (restored to lower storey, repaired to upper storey) and string courses at plinth and floor levels. Reconstructed gablets have simpler 3-light attic windows. The 3-storey porch has gablets to the main elevations, and a string course in the lower storey broken by the main doorway on W side, which has a moulded surround and 4-centred arch
with modern double boarded doors. Above, in each storey are early C16 3-light mullioned windows with Tudor-headed lights, sunk spandrels and hood mould with label stops. In the S return wall are plainer 2-light windows in the upper storeys. Projecting forward on the N side of the porch is a ruined wing now single storey of dressed stone with 2 blocked Tudor-headed arches in the S wall and springers of a similar arch in the W wall, topped by a string course. The courtyard wall is attached to this projection. The N wall of the porch has an external stack corbelled to first floor and ruins of a turning stone stair formerly housed in a projection. The S gable end of the main range is one bay with reconstructed window to the lower storey, repaired window to the upper storey and reconstructed attic window in a gablet, all similar to the front elevation.

The E wing, occupied as a farmhouse from the C17, has a 3-window front with cart shed to its R. At the L end is a square C16 ridge stack, with a later ridge stack to the R end of the house. The windows to the L are C16 4-light mullioned windows with Tudor-headed lights, sunk spandrels and hood moulds. The 2-light window above the doorway is plainer but has a similar hood mould. The shallow gabled porch is C19 and the doorway inside replaced an original window. To its R, in the unit added early C17, are 3-light windows with hood moulds. The cart shed has openings with re-used stone dressings. A wide segmental-headed doorway has C19 boarded double doors, and to the R beneath the eaves is a 2-light mullioned loft window. In the E (uphill) gable end is a segmental-headed loft doorway with stopped chamfer and renewed threshold.

At the rear the main range has a gabled projection (which housed the original stair) with outshut on its N side, and with 2 stepped 2-light mullioned former stair lights. The E wing has a shallow projection of a former stack for a lateral fireplace, into which a doorway is inserted with late C20 door. A further doorway is inserted into the rear of the cart shed. Beneath the eaves are narrow windows.

Not inspected (September 1998), but said by RCAHM Wales to retain several 4-centred doorways and a fireplace in the first floor of the main range with shallow Tudor arch.

Listed notwithstanding extensive restoration as one of the most important Tudor mansions in Glamorgan, retaining early detail.