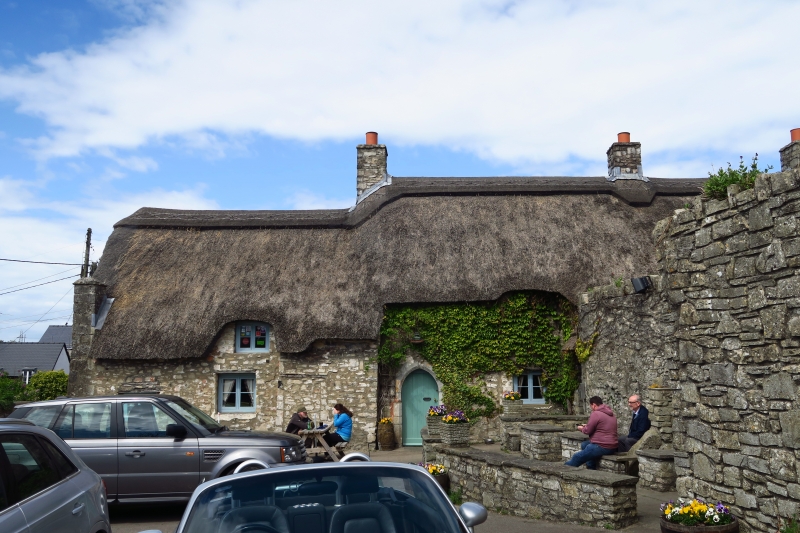 Location: In the centre of East Aberthaw village on the east side of the road.

Said to date from the C14 ('Est. 1380'), but the present property is mid C16 with later and modern extensions. This building began, presumably, as a house, but its siting and development would suggest that it became a public house early in its history. The original house had a Hall with an inner room and a kitchen with a cross-passage. The outer room was added on the east beyond the kitchen probably in the C17. The building was still single depth when surveyed by RCAHMW in the 1970s but it has since had major extensions on both sides resulting in the loss of several features. A serious fire destroyed the roof and parts of the interior in early 2004.

Thick-walled random limestone rubble fabric with dressed quoins and a general batter rather than a base batter indicating a polite build. Combed wheat reed thatched roof with eyebrows, but plainly finished, end gables. The roof has a higher ridge line over the eastern two-thirds of the building. Three rebuilt stone ridge stacks and a square stone stack at left-hand front angle of building. Two storeys, four unit single depth plan, but with a rear extension covering almost all of the ground floor.
Main south elevation has three windows, irregularly spaced and sized, all later wooden casements, central pointed-arch chamfered stone doorframe with plank door. Two staircase projections to frontage. A late C20 single storey extension to the right covers what was the fourth window.
West gable end with modern 6 over 6 pane sash window in brick frame.
Rear elevation has a small square casement window to the inner room at right. A random rubble single storey extension covers the rest of the ground floor, this has a door and three modern casements windows. Small casement in eyebrow dormer on the main wall above this.

Only the ground floor was inspected at resurvey (October 2003). The door enters the former cross-passage which had the kitchen to the right, this is now the bar area. To the left, through a doorway with half of a pointed arch stone frame, is what was the Hall with the inner room beyond, this is separated off by a stone screen with a pointed arch oak doorway. These main rooms have massive original chamfered ceiling beams with broach and diagonal stops, some original joists, and each has an open stone fireplace with heavy oak hearth-beam; each also has a winding staircase, the kitchen (bar) one with stone treads. The outer room is now windowless but it too has a fireplace with a bread oven. The building is said to retain its principal rafter roof.

Included as a well-preserved C16 house with strong regional character.