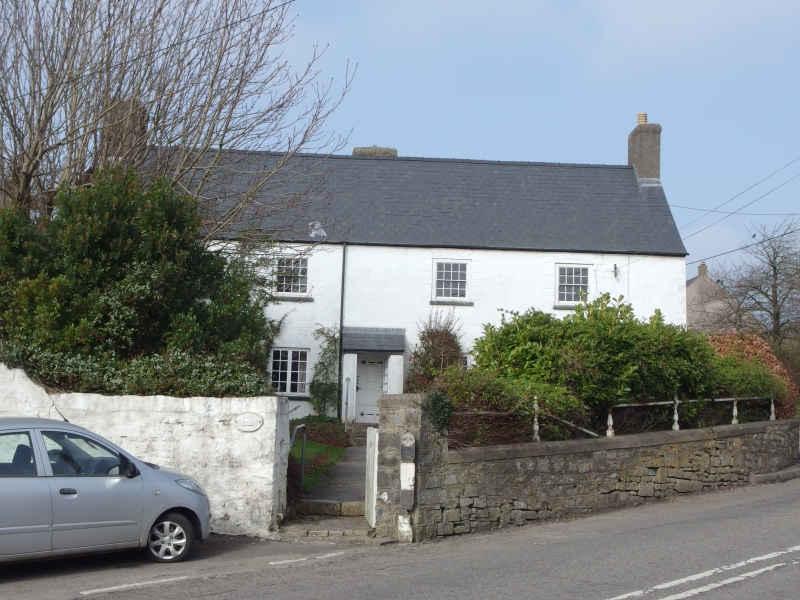 Location: In the centre of East Aberthaw village on the west side of the road adjoining The Granary.

RCAHMW describes this house as dating from c1800 and of being of one build, but there is external evidence that suggests a different interpretation as shown by the uneven distribution of the windows, and the clear difference in size of the two gable stacks. Internally the 3-room plan is a feature usually associated with the pre-Georgian period, along with the arrangement of the stair, the remains of the firestair and the C17 type hearth in the kitchen. Decorative details like the splat balusters and the heavily moulded plaster ceiling in the Parlour are also more suggestive of c1700 rather than a century later. All this perhaps suggests that it is an early C17 gable entry house extended in c1700 and altered so as to give it a more formal Georgian appearance in c1800.

The house is wholly rendered and painted, including the cambered-head rusticated window surrounds, the plain band at first floor level, and the rusticated quoin pilasters; Welsh slate roof with red ridge tiles, rendered stacks. Two-storey, single depth central entry house with continuous outshut. Four windows, two on either side of the door, but the ones on the left are much closer together than the ones on the right. The ground floor windows are 8 8 pane modern casements, while the first floor ones are 8 over 8 pane sashes. Central modern door within a small porch with lean-to slate roof and glazed outer door. Steeply pitched roof with stack on either gable, the left hand one being larger. Casement window in right gable end of outshut. Rear elevation has the roof swept down over the upper storey and has two main late C20 windows below. Projecting from the centre of the rear roof slope is the lateral stack of the Hall.
Limestone rubble walled garden forecourt, partly painted which adds to the group with the adjoining house.

Only the three main ground floor rooms and the staircase were seen at resurvey (October 2003). All four have their features hidden by modern changes. The kitchen on the west has a possibly C17 fireplace with an oak lintel and a Victorian oven, to the left is the remains of the firestair, much rebuilt. The entrance hall has the changed lateral fireplace with the staircase going round the back of it from the left. The east Parlour has a good plaster ceiling of c1700 with central roundel. The sunburst with lady's head centrepiece bears a clear relation to the Thomas Stocking ceiling of 1766-7 in the Drawing Room at Fonmon Castle (qv) and it is probably an addition to this ceiling at that date. (Marsh House was a part of the Fonmon Castle estate at that time.) The staircase has rebuilt pine treads and a small surviving section of splat baluster.

Included as a well preserved multi-period house with interesting detail.