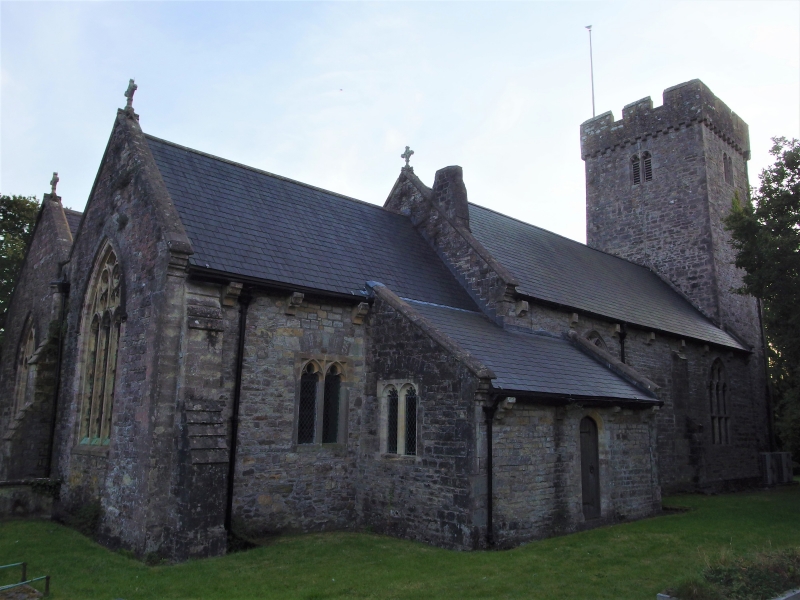 Location: Reached from the north side of the main A 48 road and set within low walled churchyard.

Parish church comprising chancel, nave, west tower, south porch and south chapel. C14 origins. Heavily restored and extensively modified by Messrs. Parry, contractors of Llandaff from designs by and under the supervision of Messrs. Prichard and Seddon, architects of Cardiff. The restoration was completed in 1860.

Decorated Gothic elevations of coursed random rubble with limestone dressings. Roof clad in Westmoreland slate. 3-light E window with hoodmould and rectangular label stops. At the junction of the chancel and the nave on the N elevation is a C19 outshut housing the organ with external round headed doorway, lit by a 2-light square headed window on the E elevation composed of two trefoil headed lights. The chancel is lit on the north elevation by a single square headed 2-light window with C19 trefoil heads, beneath a relieving arch. The N wall of the nave has two early windows comprising three cinquefoiled lights with panel tracery in the head with hood mould over with carved heads as label stops. The N wall has two slender C19 buttresses. The tower is of square plan with gently battered walls of coursed rubble with substantial quoins rising to a corbel table with embattled parapet. The belfry is lit on four sides by 2-light mullioned windows of C14 date with trefoiled heads beneath a relieving arch. The W doorway is a drop arch of ashlar blocks. Above is a C19 two light square headed window composed of cinquefoiled headed lights beneath ogee arches with a quatrefoil within the junction of the tracery above. The tower is carried on a plinth capped by a limestone stringcourse. The nave is lit on the SW side by an early Perpendicular window with three cinquefoil lights beneath ogee arches with traceried lights above in the form of blank shields with trefoils in the tracery; the hoodmould over having carved heads as label stops. The S porch is substantial with copings surmounted by a Celtic cross finial. The outer doorway is segmental and Perpendicular in form with niche above containing a sundial. The S doorway is also Perpendicular. The large S chapel extends from the S porch to the E elevation of the chancel. The S. elevation of the chapel was rebuilt in 1803 and again in 1859 when the present windows were inserted. The chapel is lit by three windows of two trefoil headed lights surmounted by tracery composing a single quatrefoil with hoodmould over. The E window of the chapel is C19 with three cinquefoiled lights with tracery of trefoil form over. The W window of the S chapel also comprises three cinquefoil lights with three elongated quatrefoils over.

The churchyard is bounded on four sides by a 1.5m high rubblestone wall. To the S of the church is a timber lychgate with collar purlin roof, slate clad. There are a pair of Gothic gates. The lychgate appears to be in the style of Seddon and Prichard and contemporary with the C19 church restoration.

The chancel has a C19 barrel vaulted roof with embattled wallplate. The chancel arch comprises a segmental pointed outer arch with an inner arch springing from the sides. The nave joins the S chapel with a pointed arch with continuous mouldings of C14 type springing from plain capitals on clustered shafts. A small doorway with pointed arch accesses the vestry. The S chapel is floored with ledger tombstones. The tower is linked to the nave by a segmental pointed outer arch with an inner arch springing directly from the walls. This arch is similar to that of the chancel but is less acutely pointed. The font is of C13 date, comprising a plain octagonal bowl set upon a modern octagonal plinth. The pulpit is C19 constructed of coloured marble of high Gothic Revival style with contemporary flight of marble steps.

Listed grade II* as an example of a substantial parish church of C14 origin with later Victorian re-workings set within the centre of the village.