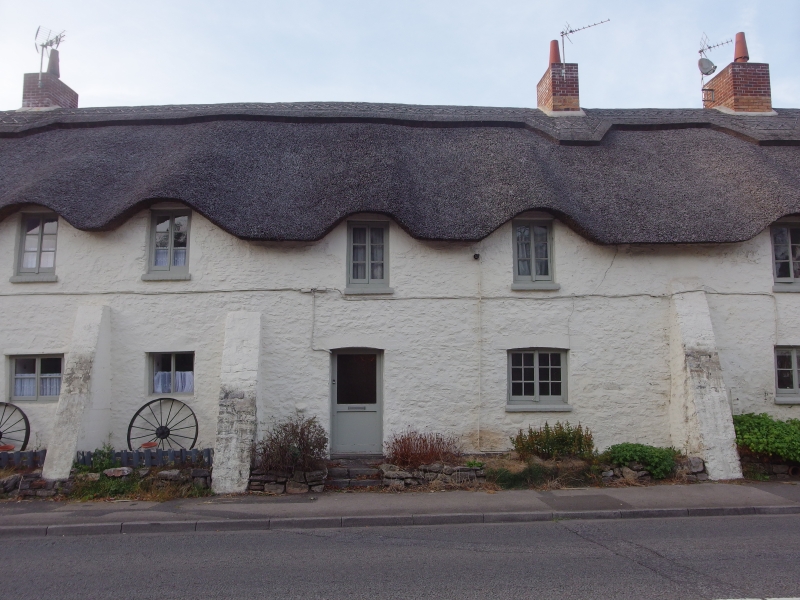 Location: Centrally located on the N side of the A48 opposite the Forge and Church Hall.

Terrace of three thatched cottages. Seven bays of three phases of construction. The eastern-most unit dating from the first half of the C17. C18 and C19 alterations.

The eastern most cottage (No 5) is of early C17 date, comprising a two cell, lobby entry plan with substantial back-to-back fires retaining timber lintels. Cross-corner stone stair without outshut remains to the northern side of the fire. The eastern hall cell was formerly lit by a three-light window on the south elevation, beneath a relieving arch. The ceiling over the hall cell is carried upon lateral quarter-round moulded beams with thirteen complexly reed moulded joists in each bay. The western cell has a joist beam ceiling and modern straight flight staircase. The central cottage (No 4) appears to consist of an earlier single storey workshop, (possibly contemporary with the eastern cottage) raised to full two storey height probably in the late C18 or early C19 (?). The western cottage dating from Circa 1700 is of two cells with central axial and gable stack at the western end, of hearth passage form with hall and outer room. The passage lying to the west of the axial stack. Gable entry timber spiral stair is located on the northern side of the axial stack.

Listed as a picturesque example of Vale of Glamorgan vernacular, illustrating organic development from the early C17 and early C18 and retaining good internal features.