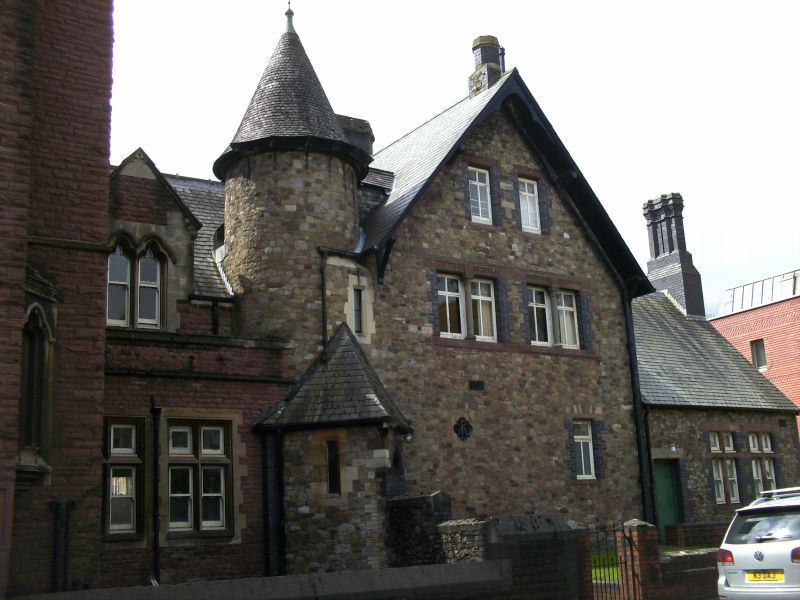 Location: On the west side of Cardiff Road and part of an important group of buildings at the south entrance to Llandaff village.

Probably begun in the early 1880s at the north end; begun by J Prichard as his own house and office and left unfinished at his death in 1886; rear elevation in southern part also probably by him but apparently rebuilt in 1905 using original features and materials. The unfinished building was taken over for St. Michael's Theological College, and greatly extended in 1905-7 by F R Kempson. The college buildings were extended in 1920 but most of the new work was destroyed by bombing in 1941 and the Chapel was added in place of one of the two lost ranges in 1957-9 by George Pace, who was architect to the Cathedral at that time.

The Prichard building is constructed of polychromatic random rubble with blue brick and Radyr stone dressings. The Kempson building is constructed of red Radyr sandstone with Bath limestone dressings. Welsh slate roofs to all.
Street elevation from north to south: a single storey wing with blue brick stack on north-west facing gable end, this was to be Prichard's office; then a taller wing of two storeys with two bay gable end to street and with a circular turret with conical roof attached to south angle, this was to be Prichard's house. The office has two mullion-and-transom windows and a plain doorway with stone lintel, steeply pitched roof. The house has a wide gable with plain bargeboards and two single light attic windows; first floor windows of 2-lights with columns, with Radyr stone cills and decorated Radyr stone lintels; on ground floor, a single light window and quatrefoil. Then the turret with loophole at first floor level and, on ground floor, a pointed doorway in the splayed angle of the tower which is finished with a conical roof in the Burges manner. To the left of this are two mullion-and-transom windows on the ground floor and a 2-light winow in a half dormer above. To south of this comes the Kempson college of 1905-7. This is in red Radyr stone. First comes a tall projecting wing with gable end to street. The right return has a 3-light mullion-and-two-transom window on the ground floor and one with single transom above with a single light one to the right and then a tall stepped stack. The gable end has a 6-light mullion-and-two-transom window below panelling and then a tall 6-light window with pointed head above. Porch with 2-centred arch doorway in the south return, with a single light window above. Extending south from the return, a three storey wing of four bays with single, 2, 3 and 4-light windows as before; some attic windows trefoiled and two have gables. The return wall of the three storey front wing also of Radyr stone, single light windows on either side of a gable stack at each level. Return of lower rear wing of polychromatic rubble; rear wall faced with similar material and is probably the rear wall of the house adjoining his own which is mentioned in Prichard's will.
Rear elevation from north to south: gable with two-centred first floor window; bay with parapet and bowed window on first floor with trefoil headed lights; projecting bay with hipped gable, panelled parapet and cantilevered balcony to first floor; another bay with smaller cantilevered balcony on first floor; rounded oriel window at south angle of front.

Part of the interior was seen at resurvey, reception hall, staircase and sitting room, but all these were very plain; the rest was not seen.

Included for its original architectural importance as John Prichard's house, for its historic importance within Llandaff Community and for its group value with the surrounding listed buildings.