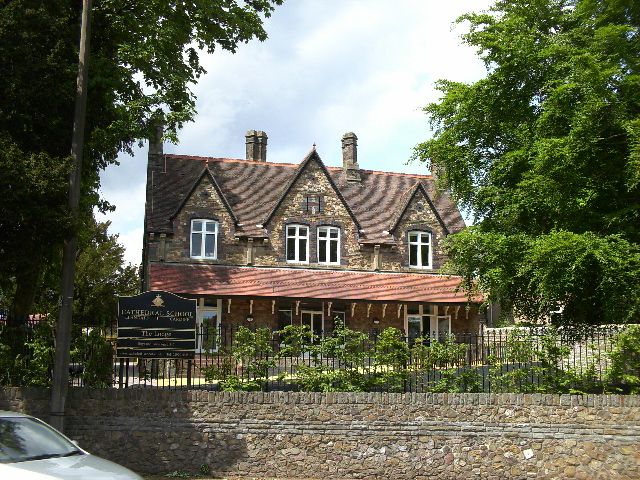 Location: On the north-east side of the road opposite St Michael's College and between the old Probate Registry and the Cathedral School.

1870 (said to have originally been dated), probably by John Prichard. It bears stylistic similarities with earlier Prichard and Seddon houses, for instance the rather grander Old Rectory at St. Fagans which dates from 1858-9; as well as with The Old Registry (qv) also in Cardiff Road which dates from c1863. During WWI it was used as a convalescent hospital for wounded servicemen and was then a hostel for St. Michael's College (qv). It is now the Music Department of The Cathedral School (qv).

Built of multi-coloured stone with some lias banding and some Radyr stone and black brick dressings, banded tile roof. Two storeys, three bay range with contemporary rear service wing and with a late C20 single storey extension from this. The C17 gabled style as used for many mid C19 rectories. The main elevation has a central door flanked by french windows, all this hidden beneath a continuous tiled verandah carried on timber brackets between stone buttress projections at either end. The first floor has smaller gables flanking a larger one. The outer ones have timber mullion-and-transom windows, the centre has paired ones with a masonry mullion between. Steep gables with fretted bargeboards. Steeply pitched main roof with three 2-flued diamond set stacks. The rear elevation is covered by a C20 brick extension to the left and the original shallower gabled service wing to centre and right. This has more stacks, one where it joins the main range and one on the gable end. Low single storey projecting wing with metal tripartite casement.

Interior not inspected. Said to have an impressive top-lit stairhall with cusped timber arcading and pierced quatrefoils and discs to the stair balustrade and gallery.

Included as a good and little altered house probably designed by John Prichard and having strong group value with the other listed buildings in Cardiff Road.