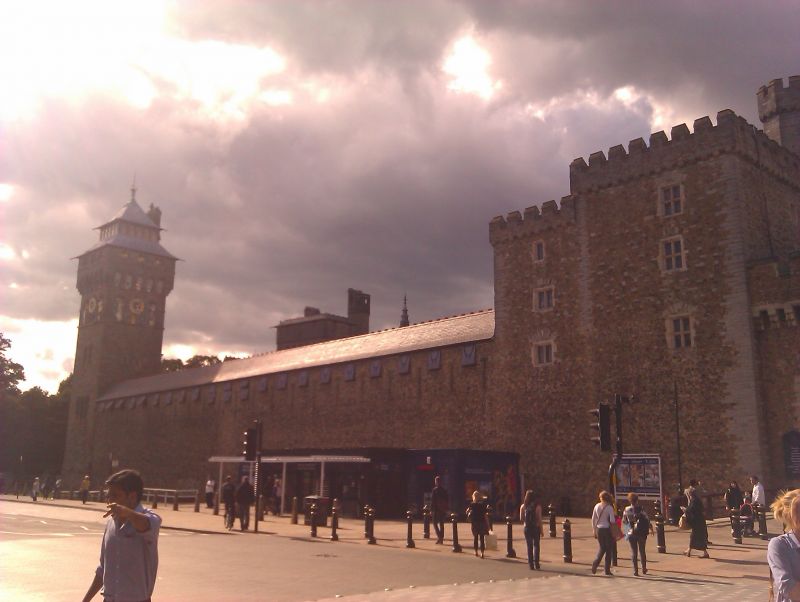 Location: On large site on corner of Duke Street and Kingsway, Bute Park to N and W.

For full details of history see References. A Roman timber fort stood on the site from circa AD55-60, successively rebuilt, until around 280 a large stone fort was built, whose foundations define the present castle enclosure. Around 1081, William I built a motte within the Roman enclosure, upon which the present polygonal stone keep was built about 50 years later. This was modified c1300 with addition of S tower; an inner bailey wall was constructed, and probably the Black Tower. Around 1429-39, Richard Beauchamp, Earl of Warwick built a polygonal tower and new domestic range against W wall The range was enlarged in the late C16 by Henry Herbert, Second Earl of Pembroke. The castle was inherited by Lord Mountstuart, later the first Marquess of Bute in 1776 who had the western apartments modified by Henry Holland, and the grounds landscaped by Lancelot Brown. Further work 1817. Some work to Black Tower by John Prichard, 1850. From 1868, the Third Marquess of Bute employed William Burges (1827-1881), amongst the most important Gothic revival architects and designers of the period, to transform the castle into a High Victorian medieval fantasy with particularly exotic interiors, executed by a team of leading artists and craftsmen. The castle also retains important fittings and furnishings from this period. Burges' sources range across much of European Gothic art; the Arab Room introduces an Islamic influence. Burges' schemes were continued after his death by William Frame, although Burges' elaborate Grand Staircase, partially completed, was removed in early C20. The S gate and barbican Tower by J P Grant, 1920s; West gate 1921. The Roman walls were exposed and rebuilt to more than their original height between 1891and 1923. The Castle was given to the City in 1947 by the 5th Marquess of Bute.

Listed Grade I as an exceptional building with outstanding architectural features from many historical periods. The High Victorian interiors are of the highest architectural and historic interest, and include important original fittings and furnishings, designed and executed by leading designers and craftsmen.
Scheduled Ancient Monument. Cadw Ref No 5/0938/GM171(CDF)