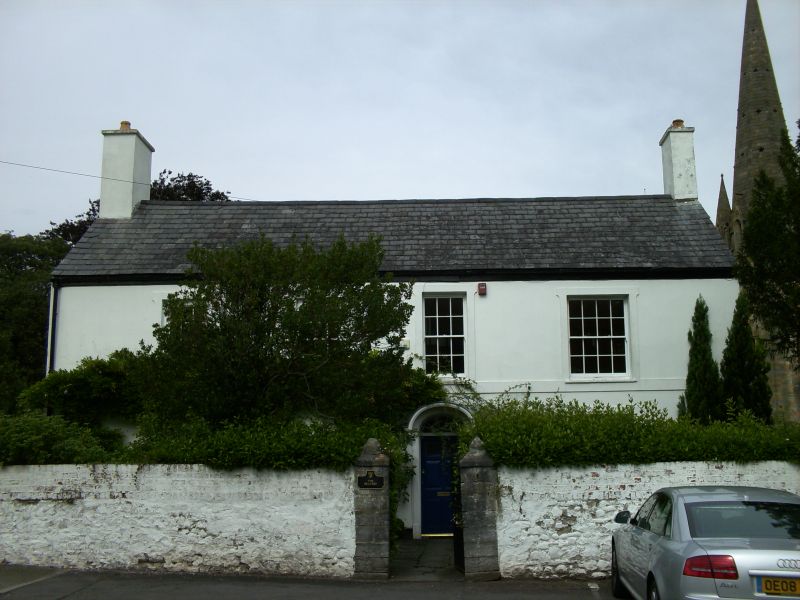 Location: On the north-east side of The Cathedral Green and part of the important group of buildings surrounding it.

A late C18 or early C19 exterior to a possibly older core. A house is shown surrounded by a walled garden on John Speed's plan of 1610 but it is not in this position. The position shown is of the Belltower and may be a house which incorporated the ruins. The present house, previously known as The Cottage, has only been The Deanery since 1953 when the Bishop moved into the old Deanery, now Cathedral Court (qv). The uneven arrangement of the windows suggests a pre-Georgian building and these may reflect an early C19 remodelling when the rear wing was also added.

The house is rendered, presumably over local rubblestone, with a band between floors and has a Welsh slate gabled roof descending very low to rear. Entrance front of two storeys and four window bays. Doorway to right hand of centre, this has a curved hood, segmental fanlight and 6-panelled door with raised-and-fielded panels. Triple sash (possibly later) to left hand on ground floor, 2 over 2 panes flank 4 over 4, the other windows are sashes with glazing bars and horns, 6 over 6 panes, but 8 over 8 panes in the right hand bay. Quite low pitch roof with gable stacks, the one to the left being larger.
The rear elevation has has the roof coming low behind the left hand part and with a two storey rear wing behind the right, this may be a later addition, certainly in part as it appears to be of two builds. A blocked arch is said to have been discovered on the rear of the house, but this was not seen.