Church of St Mary of the Angels R.C. 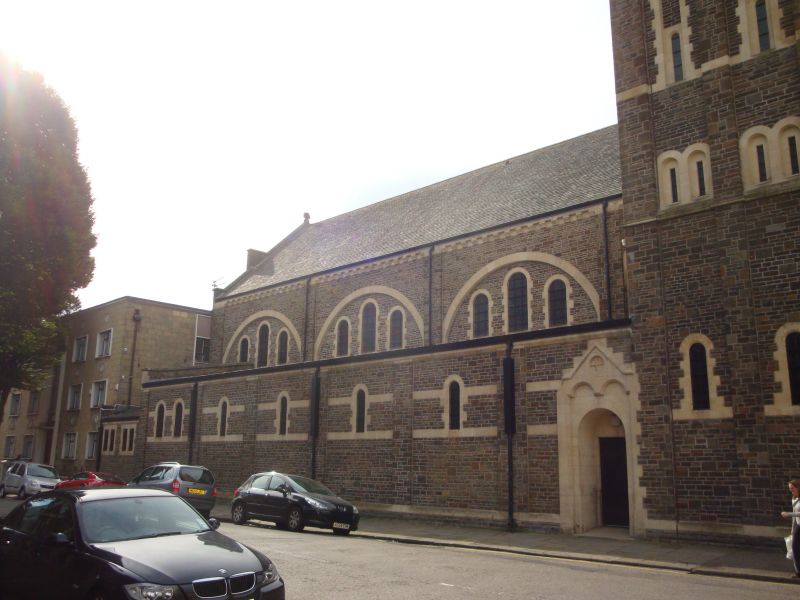 Entry Name: Church of St Mary of the Angels R.C.

Location: A prominent building in the centre of the Community about 400m north-east of Canton Cross.

The church is built of roughly dressed Pennant sandstone of different rectangular or square size and laid in parallel courses; sharply cut Bath stone ashlar dressings. Nave, side aisles, chapel of the Sacred Heart at east end of north aisle and Chapel of St. Anne at east end of south aisle, north-west tower. Late C12 French style. The west entrance front has a tall gabled centre bay rising to the apex of the nave; tall round-headed arch rising almost to full height of bay with round-headed Romanesque doorway with three orders and paired doors recessed within it on the ground floor and with tall round-headed windows above; corbel table and arcading between the entrance arch and the windows. To either side is a narrower bay with parapet; rounded-headed openings, single and paired with arcading at the top level. Gabled priests' doorway in two storey wing to right. The side walls of the nave have triple clerestorey lights in large semi-circular arches with strip pilasters between, corbel table, steeply pitched roof. The north aisle has single light windows with strip pilasters between and paired stone bands. The south aisle is hidden, as is the east gable wall. Tall north-west tower which was part of the original design but built later. Four stages with projecting stair turret on the west wall. The ground stage has a small apse with three slit windows to Kings Road and two single light windows to Talbot Road. Clasping corner buttresses with a central srip buttress, both to full height, bands between stages at cill levels. The first stage has paired round headed lights, the second stage has two tall strip lights and the belfry has paired louvred openings, castellated parapet.

Included as a very good Roman Catholic church designed by a notable Edwardian architect in the field.